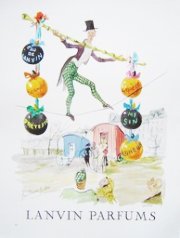 I'd been yearning to try Lanvin Scandal for a while now. It seemed like references to Scandal turned up everywhere: in a list of leather scents, in my research into perfumes made in the 1930s, in other perfume blogs. The problem was that Scandal was discontinued in 1971. At last, in a swap, I got my hands on three precious milliliters of it. Now I just had to hope I wouldn’t fall in love with Scandal.

A spritz of the amber-brown liquid on my arm, and the tingle of aldehydes spreads over a warm profusion of orange flower, jasmine, rose, and something very slightly like the scent of a peaty single malt scotch. As the fragrance settles, the flowers remain strong but reveal a pinch of clove — this could be carnation — but not as much spice as in, say, Weil Zibeline.

Then the leather begins to surface. Scandal’s leather is dry, closer to that of Jean Desprez Bal à Versailles than to Chanel Cuir de Russie, but it is still fine leather. If Cuir de Russie’s leather is a 1950s calfskin handbag that snaps shut with a click, then Scandal’s leather is also calf, but a high-heeled boot, well worn but the sexier for it. Cuir de Russie’s flowers are cool and elegant while Scandal stays warm until the end, when the leather begins to fade slightly and a residue of sandalwood lingers for another half hour or so.

Overall, the fragrance is luminous but dark, like topaz on velvet. It is correct but not proper, and carefully but lushly constructed. If I had to assign it to a movie star, I’d choose Jeanne Moreau in a trench coat and — yes — those calfskin boots and an expensive handbag, running through the rain on a Parisian street to a café to meet someone she shouldn’t be seeing. When she takes off her coat and the scent of cold city falls away, the Scandal on skin, warm now, mingles with the perfume of coffee and cigarettes.

Andre Fraysse created Scandal in 1933, the same year Guerlain Vol de Nuit and Creed Angélique Encens were released. Besides general descriptions of Scandal as a leather chypre, I couldn’t find a listing of its notes. I can see why the grand and classic Scandal might falter against the hippie-fueled years of the late 1960s and early 1970s, but I don’t understand why it couldn’t weather the storm with its peers, Jean Patou Joy, Rochas Femme, Balmain Jolie Madame, and Chanel No. 5. Why Arpège and not Scandal, for instance? Go figure.

As you can tell by now, I did fall in love with Scandal. But thanks to some loons in Lanvin’s marketing department, Scandal will have to live on my shelf of unattainable dreams, right up there with Sean Connery in Goldfinger and jeans that actually fit.