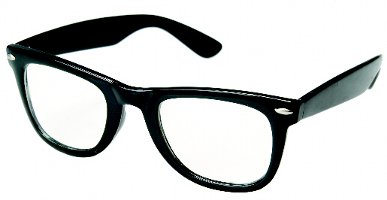 In a recent post at Perfume Posse, Musette described her adolescent self as "Geek before Geek was cool". During a week when I watched The Social Network and contemplated buying a Gregory Brothers / Auto-Tune the News t-shirt, her description was just another sign that we have lived to see the day my mother was always promising me would come: nerds have inherited the earth. We've come a long way since the 1980s and nerdom has evolved: gone are the high pants and the pocket protectors (as well as most of the pens), nerds of every gender and race are acknowledged, and globalization and the internet have opened up new, niche fields of nerd inquiry. No longer restricted to math, science, computing and Star Trek conventions, nerds are becoming foodies and bespectacled mixologists, pop musicians, graphic novelists and film bloggers, beekeepers, adventure travelers, market watchers, reality television competitors and whistle-blowing website activists. Nerds have money. They own the best home theatre equipment and make the coolest Halloween costumes. They know the only coffee place in town with a Clover. And, increasingly, some of them are smelling really good.

Perfume is a great hobby for geeks and systems wonks. It can involve hours and days and weeks of research into a secretive, trend-driven and detail-oriented industry. You end up collecting bottles and vials, ordering or swapping rarities through the mail and building storage units or furniture to organize your collection. You exhibit a lot of mavenish behavior, like checking currency conversion websites multiple times a day. Almost every perfumista of long-standing I know keeps a spreadsheet or electronic notepad full of data on sample testing count, fragrance notes, prices, perfumer names or vintage scent markers. Samuel Butler once wrote that knowing what gives us pleasure is "not easy, and how to extend our knowledge of it is the highest and most neglected of all arts and branches of education". Dedicated fragrance nerds take this to heart.

Two of the most common ways for those in the online fragrance community to study what pleases them is to follow: 1) a perfumer's known body of work; and 2) different representations of a given note. It is particularly enlightening to study both at the same time. After years of working confidentially behind the scenes, unknown to the public, noses are understandably skittish when asked about their style and process. It is rare that you get an answer like Sophia Grojsman's: "Perfumers have signatures. You can pick up a fragrance and know who the perfumer is by the way certain ingredients are put together. I’m known for floral accords, bottoms and cleavage."1 And yet, examining those signatures or the way a perfumer handles a specific genre or note can be one of the most fruitful ways of determining what you like and/or don't like about it. Recently I've noticed that some of my favorite noses seem to have a unique way of approaching notes I find problematic in other fragrances. Please find below the five perfumes that started my musings on this topic and comment with observations on some of your own favorites.

Parfums de Nicolaï Eau d'Été: I am a fan of the way Patricia de Nicolaï handles many notes, but I am always especially impressed by her use of lime. In cuisine, lime juice or zest gives such sharp, clean radiance to a dish that it seems to focus other flavors; in perfumery, all too often it comes across as flat and indistinct. Several of Nicolaï's summer scents have started with a kick of fresh-squeezed lime — in addition to my beloved Eau d'Été, there are Eau Exotique, Eau Turquoise and Balle de Match. Even Vanille Tonka opens with a bright burst of lime that complements the otherwise powdery and PEZ-sweet top notes. Wearing Nicolaï fragrances has made me realize that I like lime best when it is executed like marching band music: brisk, bracing and clear as brass. It gets me walking faster.

Ormonde Jayne Champaca: Like Nicolaï, Linda Pilkington of Ormonde Jayne has overseen beautifully fresh openings with lime (Frangipani and Tiare). Another of her many tricks seems to be to the use of pink pepper to give pop to lush florals. A ubiquitous note lately, pink pepper is commonly set on top of a dry woody or clean patchouli fragrance, almost like a bubblegum-colored wig: "I'm spicy! Racy! Modern!" The result is a very bare, generic fragrance. Meanwhile, Ormonde Jayne fragrances like Champaca and Ta'if use it to balance very full heart notes. Despite its pink pepper, creamy musks and green tea base, when I smell Champaca, I am not reminded of a dozen other recent fragrances: it somehow manages to smell uniquely and wonderfully like itself, which is perhaps the greatest compliment a perfumista can bestow. (See Robin's rant of yesterday or the close of her excellent Champaca review.)

Christian Dior Cologne Blanche: (R.I.P, my good friend. This one is apparently discontinued.) I am wary of orange blossom. I love the wild, airy, innocent jasmine-like presentations of this scent — maybe see Guerlain's L'Heure Bleue for reference — but as Angela has pointed out, a lot of cheap soap and drugstore cologne smells like orange blossom. It's hard to shake your association of the note with shrill and thin functional products.  A few months ago, though, I noticed that almost all of the few sunny, baby-powdered orange blossom fragrances I liked were done by one man: perfumer Francis Kurkdjian, also the creator of some of my favorite heavy-hitters, like MDCI Enlèvement au Sérail and Dior Eau Noire. Like Kurkdjian's Fleur du Male for Jean Paul Gaultier, Dior Cologne Blanche highlights the bright, white-tiled cleanliness of orange blossom by off-setting it with a sprig of aromatic notes normally seen in fougères: there is a lovely accent of rosemary in Cologne Blanche. Of course, when I first noticed the orange blossom-Kurkdjian connection, I thought I had made a discovery to be reported to everyone... until I recalled that Maison Francis Kurkdjian features something like four variations on orange blossom cologne. Ah, somebody noticed before me.

Armani Privé Ambre Soie: Christine Nagel is another of my favorite perfumers. Her amber fragrances — the first feminine Mauboussin, Fendi Theorema, several of her Thierry Mugler scents and this one — are gorgeously lush without being too dense. While sweet and warm, they avoid the vanilla bottom-heaviness of traditional orientals. I think her secret involves cedar and musks... but it certainly involves what my brother would call "mad skills".

Parfums DelRae Emotionelle: Edmond Roudnitska was a master of melon notes (among others) — his oeuvre includes Diorella and Frédéric Malle Le Parfum de Thérèse, after all. It somehow seemed inevitable that his son, perfumer Michel Roudnitska, would tackle a melon perfume with his characteristic take-no-prisoners approach. Emotionelle is reportedly based on the Paris breakfasts of line founder DelRae Roth. It smells like the Cavaillon melon that ate Provence: it is a huge, loud, balls-to-the-wall monster that lasts for days. It is liberally laced with jasmine, but not so as you'd notice. As with many of M. Roudnitska's creations, I initially hated it, yet eventually found myself coming back for more. There is something so compellingly juicy and real about it. I would have sworn there was melon in another of my DelRae favorites, Amoureuse, but I don't see it listed in the notes.

1. Quoted in In the World of Fragrance, Reputations Rest on the Nose at the New York Times.