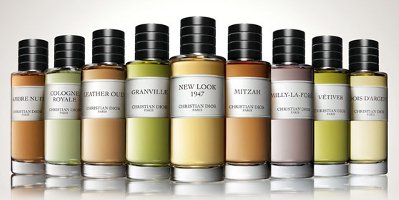 Christian Dior has launched La Collection Christian Dior, a set of 10 "rare, authentic and elegant fragrances for men and women, created using only carefully selected, exceptional raw materials". Three of the fragrances — Ambre Nuit, Bois d'Argent and Eau Noire — were previously released under the Dior Homme cologne collection (Cologne Blanche, from that same collection, appears to have been discontinued). The 7 new fragrances are:

Cologne Royale ~ "Cologne Royale is an exceptional Cologne, inspired by the Royal Courts of the 18th century, of which Mr. Dior was so fond. “An exercise for a Perfumer, wherein the quality of a fragrance entirely depends on the quality of its ingredients, and its citrus fruits, in particular.” says [perfumer] François Demachy." With notes of bergamot, lemon, neroli, mint and sandalwood.

Leather Oud ~ "Highly powerful, vibrant and deep, Oud Wood is rare and particularly recognizable by the leather scents that it diffuses when burned. Using this unique wood, François Demachy created an intensely masculine fragrance, with strong character in which Leather notes intertwine with those of Gaiac Wood, Cedar and Sandalwood." Additional notes for the woody leather fragrance include cardamom and clove.

Granville ~ "The House where Christian Dior spent his childhood is located in Granville, in the Normandy region. Built overlooking the cliffs, it is surrounded by pine trees and has a view of the sea. Inspired by this site that is so dear to the Creator, François Demachy chose to create a fresh, invigorating and aromatic fragrance. “I not only wanted an aromatic fragrance, as the estate has an abundance of pine trees, but also one that is exceptionally invigorating and extremely fresh...” The notes for the spicy aromatic include pine, thyme, rosemary, lemon, black pepper and sandalwood.

Mitzah ~ "Christian Dior loved and thus surrounded himself with women. When he arrived in Paris, he met the woman who would later become both his muse and advisor: Mitzah Bricard, an extremely sensual woman, with a divinely chic allure and captivating presence. François Demachy has paid tribute to this lady, by creating a fragrance that bears her name: a mysterious, captivating spicy oriental perfume." The notes for the oriental include rose, patchouli, coriander, cinnamon and frankincense.

Milly-la-Forêt ~ "After his fashion shows, Christian Dior loved to get away from high society Parisian life in order to recharge his batteries at his home in Milly-la-Forêt. “Hidden away from the world and surrounded only by my flowers, my canals and my small pond, I can listen to the sound of the Milly bells in peace.” he writes. Wandering through the surrounding woods, François Demachy imagined this fragrance as the embodiment of a romantic walk in the forest, with a fresh, tender and cottony scent. The notes for the musky citrus include orange blossom, jasmine, iris, mandarin, neroli, white musk and sandalwood.

Vétiver ~ "Mr. Dior had a particular sense of elegance and sophistication. Inspired by this and his timelessly chic style, François Demachy has created a powerful, intense and raw Vetiver fragrance. A masculine raw material par excellence, Vetiver makes up more than one third of the fragrance and is combined with Coffee, a round, slightly bitter, roasted note, creating an unusual aromatic blend." The woody aromatic features notes of grapefruit, coffee and vetiver.