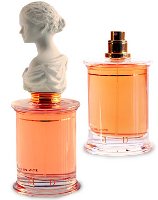 It's easy for me to bemoan the destruction of such legendary perfumes as Worth Je Reviens and Carven Ma Griffe, and to be suspicious of the reformulations of other perfume darlings, like Guerlain Mitsouko. Everywhere I turn, I hear something else alarming: that the Caron reformulations are a travesty and my beloved Tabac Blond will never be the same, or that Jean Patou 1000 may be discontinued. (I can't speak to either of these, by the way.)

Then along comes a fragrance like Parfums MDCI Enlèvement au Sérail to remind me to chill out. High quality, complex fragrances are still being created. Some of them, like Enlèvement au Sérail,  have a vintage feel that I love, while others are decidedly more modern, like Jean Claude Ellena's perfumes from Hermès. We are lucky to experience them.

The scent opens with juicy mandarin orange that within seconds is joined by ylang ylang and rose. Enlèvement au Sérail smells friendly and springlike at this point, like a pale peach satin dress on the flower girl at a wedding or a shower of petals from a blossoming plum tree. Within ten minutes, the fragrance's jasmine steps forward, almost making the scent vibrate. The fragrance loses its girlish feel and becomes womanly and luxurious without being heavy.

Although it's not listed in the notes, before long I begin to smell the warm earthiness of oakmoss mixed with sandalwood, and this is where Enlèvement au Sérail becomes less pretty but more profoundly beautiful. People who don't like chypres or stay away from vintage fragrances might not like Enlèvement au Sérail just for this stage in its development. After a few hours, the peach and jasmine fade away, and an easy mix of sandalwood, patchouli, and vanilla linger. Enlèvement au Sérail is quiet when dabbed and lasts four or five hours on me. Like a flattering Marilyn-era dress or a day when my hair curls more than frizzes, Enlèvement au Sérail raises the bar. I feel like a better version of myself when I wear it.

Since Enlèvement au Sérail smells so vintage, I compared it to a few drops from a tiny bottle of Edmond Roudnitska's Rochas Mousseline parfum that I have squirreled away, and they're remarkably similar. The Mousseline is mossier, but they could be sisters.

Yes, it is sad that Christian Dior Miss Dior may never be the raunchy countess she once was, and that Lanvin Scandal is gone for good. But, as they say, it really isn't any use crying over spilt milk. With Parfums MDCI, Amouage, Frédéric Malle Editions de Parfum, and others releasing such enthralling fragrances these days, I'm ready to turn away from the past and look forward with anticipation.