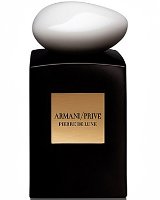 Giorgio Armani launched the Armani Privé quartet in late 2004. It is the line's first entry into the high end luxury fragrance market, and the perfumes have the packaging and price tag to match. According to Armani,

I wanted the perfumes to be close to the way perfumes were made in the past - just me working with perfumers to find fragrances that I believed in and liked, with no limit on the price of raw materials. (quoted in The Independent, 1/22/05)

Pierre de Lune, also known as Moonstone, features violet, green notes, cassie flower, iris and belambre, a synthetic with a woody-ambery odor. It starts, as promised, with sweet violet tinged with green notes. Once that calms, the cassie takes the stage, and it remains prominent through the dry down. Cassie is not my favorite floral note, but despite that, I found Pierre de Lune to be the most interesting of the four perfumes. It is also noticeably the most feminine.

The belambre provides a diffusive, almost fizzy quality to the early stages; later, it gets warmer and softer, and the iris lends a velvety, lightly powdered finish. There is a hint of something lightly candied in the base, but it is not an overly sweet fragrance. Very much worth a try, especially for those fond of cassie flower.

Ambre Soie has notes of ginger, cinnamon, clove, cedar, patchouli and amber. The top notes are lovely: deep, rich and resinous, with a hefty kick from the spices and a creamy, melt-in-your-mouth sort of finish. As the top notes fade, it gets thinner and more transparent, and the spices become rather subdued; not being a huge amber fan, I rather lost interest.

It is easily the most gourmand of the four, but it is nothing like as foody-rich as Hermès Ambre Narguile, nor is it as long lasting. I read somewhere that Bois d'Encens is the biggest seller of the line; if I had to guess, I'd pick Ambre Soie as the next most popular, but it was my least favorite of the four.

The fragrances are $185 for 50 ml — twice as expensive as the Hermessence line. Ouch. They are nicely done, but to my mind, they are not twice as nice as the Hermessences, in fact, if offered the choice, I'd take the Hermessences. And, sadly, there is nothing like the Hermès Discovery set that would allow you to buy small quantities of each, although if money is no object, there is a gift set of full-sized bottles for $740.

They are beautifully packaged in square glass bottles with an outer casing made of Kotibe wood. For buying information, see the listing for Armani under Perfume Houses.