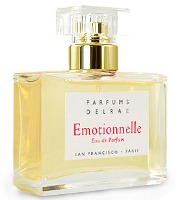 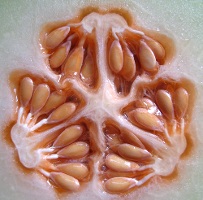 Melon is the new black. It is not the new black I was hoping for as I stuck pins in my sweet-fruity-floral voodoo doll, but there you are: be careful what you wish for. If you like melon in your perfume, you are going to love Emotionnelle, the latest fragrance from Parfums DelRae, which opens with the biggest, brightest, juiciest melon (Octavian at 1000 Fragrances: "I've never seen such a huge and hyper realistic melon note...") ever bottled. You can just about taste it.

Emotionnelle was reportedly inspired by the smells DelRae Roth recorded in her diary on a visit to Paris (why couldn't she have had jasmine and frankincense for breakfast?), but perfumistas will more likely notice the links to Le Parfum de Thérèse, created by perfumer Edmond Roudnitska for his wife during the 1960s and released by Frederic Malle in 2000. Roudnitska's son, Michel Roudnitska, developed Emotionnelle, and as his DelRae Début might be seen as a modern take on his father's Diorissimo, so Emotionnelle could be the modern take on Thérèse.

Le Parfum de Thérèse is a long time favorite of mine; I said when I reviewed it that it "would certainly make my list of desert island fragrances", were I forced to come up with such a list. And there is melon in Thérèse, to be sure, but in Thérèse it is an accent — it gives lift to the soft, spicy woody-leathery base — in Emotionnelle, it is front and center, from the first spray to the last gasp. There are other notes, to be sure (the list: tangerine, bergamot, violet leaves, jasmine, rose, plum, cedar, vetiver, carnation and amber) but I hardly notice them.

Michel Roudnitska is brilliant, and this is no doubt a brilliant perfume (Denyse at Grain de Musc: "Great job, beautiful scent."). I just don't like melon (Patty at Perfume Posse: "Wow, melon hell."; Tom at Perfume Smellin' Things, after smelling Emotionnelle on Patty: "I however ran from it and was glad that March, who is old and censorious friends with Patty asked her to please wash it off forthwith."). I spent some time yesterday trying to decide which I liked least, Emotionnelle or Hermès Un Jardin après la Mousson, and finally decided it wasn't worth figuring it out: they're different breakfasts, but they're both still breakfast.

Note: image at top right is Melon seeds by Xerones at flickr; some rights reserved.