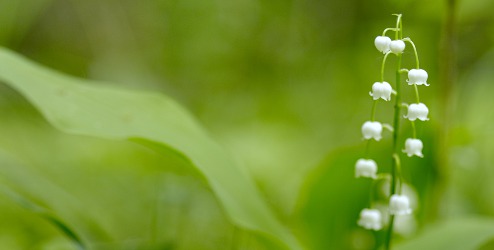 “There’s so much subtlety in lily-of-the-valley that I’ve often dreamed of sublimating it. I dived right into its fragrance in order to reproduce the beauty and supply voluptuous quality of this flower which is fragile as porcelain.” Jean-Claude Ellena

Muguet Porcelaine is the latest to join the Hermessence range at Hermès, and the choice of subject, lily of the valley, was something of a surprise, to me at least.1 Perfumer Jean-Claude Ellena widely cites perfumer Edmond Roudnitka as his mentor, and Roudnitska, of course, made Diorissimo, surely (if you think otherwise, don't tell me) the reference lily of the valley.2 It struck me as highly unlikely that Ellena would wade into those same waters, so I was expecting a sort of meditation on lily of the valley, not really a soliflore or even something I'd necessarily recognize as lily of the valley.3

But no, surprise surprise, what we have here is exactly what the name suggests. I have not yet worn it next to Diorissimo, and I don't know that I ever will, so this will not be a blow by blow comparison, and to attempt one would be pointless in any case — I have no idea what a new bottle of Diorissimo smells like these days, and I plan to remain blissfully ignorant on that score. What I can tell you is that the opening of Muguet Porcelaine induces the same euphoric feeling I get from the first spray of my nicely-aged vintage versions of Diorissimo: ah, spring! For a few seconds, I thought Ellena might be wading deep into Roudnitska territory, but no, it is recognizably a Hermès pretty quickly. There is a blurred green backdrop, heavily (in the relative sense) spicy-herbal-peppery for a very brief time, then mildly so, smoothed over with the watery effect we have seen in a number of Ellena's recent fragrances.

And there is lily of the valley. It is not air-freshener clean, but it is not at all indolic either, and while it is lily of the valley straight through to the end, after the top notes fade it stays comfortably nestled in its greenery; it is not a bouquet pressed to the nose (although you can extend the lovely opening by spraying it on clothing or a scarf). The overall effect seems to encompass the whole of the dew-soaked garden, as such, it feels more relaxed / casual, cleaner, and less overtly feminine than Diorissimo. As you'd expect, it is a sheer fragrance, with a pale base, and it works best when applied generously, even then, you're going to need to reapply in a few hours.

Verdict: I think it's perfect, and I know I've typed this sentence a dozen times over but I'll type it again: you know who you are, and you either like Ellena's style or you don't. I do. When I reviewed Cuir d'Ange I noted that I divide the Hermessences into three categories: the few I don't care about at all, the few that I need in 100 ml, and the rest, which I generally need in 15 ml. Muguet Porcelaine joins the latter category, and just as well since I've already got the little green-tinged bottle in my possession (bought unsniffed, may Donatella have mercy, and while I'm at it I'll confess to my brand new coffret with L'Ambre des Merveilles, Terre d'Hermès, Le Jardin de Monsiur Li and Eau de Néroli Doré).

More muguet: If you want a lily of the valley with some serious sillage, you probably need Van Cleef & Arpels Muguet Blanc (too clean for me personally), or possibly the lovely Parfums DelRae Debut, which was developed by Roudnitska's son, Michel (and Ellie by Ellie D is another of his muguet perfumes). Penhaligon's and Annick Goutal both make soliflores which are worth trying. Parfums MDCI Un Coeur en Mai is possibly just as sheer and ephemeral as Muguet Porcelaine, but it is also worth a try if you have not yet found a perfect lily of the valley. If you want something more abstract and modern (and reasonably priced), get a bottle of Stella McCartney L.I.L.Y before they all disappear (it's reportedly been discontinued).4 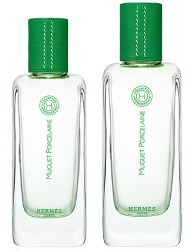 Note: top image is lily of the valley [cropped] by Aleksey Gnilenkov at flickr; some rights reserved.

1. And as reader Coumarin pointed out when I announced Muguet Porcelaine, Ellena apparently ignored the many suggestions for the next Hermessence that we gave him in a poll question at the end of my review of Cuir d'Ange.

2. Ellena on Diorissimo: "It's one of my points of reference. No, it's more than that; it's among the creations I admire because it so accurately captures the difference between a smell and a perfume. Its starting point is the smell of lily of the valley. The end point for a composer of perfumes is to transform a unique smell into a perfume. [...] So we have our theme, our idea; now we have to add something of ourselves: our own desires and — this is the most complex part — our personality." The Diary of a Nose: A Year in the Life of a Parfumeur, p. 109.

3. Ellena on gardenia: "The gardenia perfume I like best is Chanel's, because it does not smell of the flower but of happiness." Ibid., from "A Summary of Smells" at the end of the book (no page numbers).

4. I should mention that the Van Cleef & Arpels definitely came out after IFRA restrictions made it harder to make a decent lily of the valley fragrance, so I presume it still smells pretty much like it did when I reviewed it. I'm not so sure about the others mentioned in that paragraph.