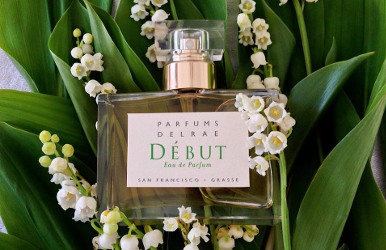 Parfums DelRae launched Début, their fourth fragrance, in 2004. Like the others in the line, it was created by perfumer Michel Roudnitska. The notes are bergamot, lime, ylang ylang, fresh leaves, lily of the valley, linden blossom, cyclamen, vetiver, sandalwood and musk.

DelRae Roth, according to the Parfums DelRae website, has had a lifelong interest in perfume, and began mixing her own essential oils prior to working with Michel Roudnitska:

The perfume world is dominated by four or five huge companies and I did not think that the quality was always there. I was convinced that it was still possible to create a perfume of integrity using the very best ingredients. (The Journal, Newcastle, England, 11/29/2004)

Such, of course, might be the motto of any niche perfume line, but the DelRae line, more than most, lives out the sentiment: the fragrances are both unusual and beautifully done, and although they are expensive, one does not, as in some cases, feel that one is paying merely for the privilege of buying something exclusive.

Début is my favorite from this line. It has been aptly described as "an entirely modern take on a fragrance that pays homage to Diorissimo" (International Herald Tribune; 2/10/2004). Messing around with Diorissimo might seem a dangerous undertaking, but Michel Roudnitska's creation is a wonder in its own right, and manages to be a fitting tribute while maintaining its own distinct personality.

It starts with a sharp little burst of citrus and green notes sweetened by ylang ylang. The linden joins in shortly thereafter, with a lingering hint of lime, and eventually the lily of the valley appears and the sweetness (and sharpness) of the top notes begins to calm. After a time, it settles into an indistinct soft floral over a pretty woody musk base.

It is a soft, feminine fragrance, clean without being soapy, and fresh without evoking cleaning products. To my nose, it is a bit duskier and less bright than Diorissimo, but at the same time, it nicely captures Diorissimo's young but sophisticated character. It is more sheer than heavy — certainly more sheer than the other fragrances in the DelRae line — but despite its delicate nature I don't find it wispy or insubstantial, and the lasting power is extraordinary for an Eau de Toilette. I can still smell it 8 hours after application.

Début is an Eau de Toilette, and runs $80 for 50 ml. For buying information, see the listing for Parfums DelRae under Perfume Houses.

Update 10/1/2006: the Eau de Toilette has been discontinued and replaced with an Eau de Parfum.

Update 11/15/2006: the new Eau de Parfum is a deeper, richer, but still true-to-the-scent version of the original Eau de Toilette. The floral notes in the heart stay around much longer before it fades into the musky woods of the dry down. I found the overall lasting power to be about the same, but then, the Eau de Toilette already lasted all day on me. The Eau de Parfum is priced at $125 for 50 ml.