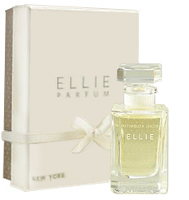 Ellie is the fragrance debut from Ellie D, a line created by Jessica Dunne. Ellie was inspired by (and named for) Dunne's grandmother; Dunne reportedly wanted to "create a perfume infused with nostalgia with youthful and modern sensibility". The perfumer was Michel Roudnitska, and the notes include bergamot, tangerine, cyclamen, lily of the valley, jasmine, gardenia, rose, fig leaves, vetiver, sandalwood, musk, vanilla and coconut.

Ellie starts with bright citrus and greenery; the heart is a simply lovely blend of florals dominated by lily of the valley. The jasmine is ever-so-slightly indolic, and there is a tiny, short-lived hint of rose. The base is warm, pale musky woods with a mild touch of earthiness from the vetiver. The vanilla and coconut accent the lushness of the florals without drowning them in sugar — despite the fact that the coconut is quite noticeable, it does not have the tropical cocktail or suntan oil feel that coconut sometimes lends.

The notes are so similar to Debut by Parfums Delrae (also by Michel Roudnitska) that it is impossible not to compare them. Ellie is a warmer, more restrained fragrance, not so bright and crisp, and the link to Edmond Roudnitska's Diorissimo that is so evident in Debut is more tenuous here. The Ellie D website refers to Ellie as "ladylike", and that is exactly what it is: a quieter, calmer lily of the valley, still spring-like, but not so youthful or exuberant. None of that should be taken to mean that it feels old-fashioned. Both Debut and Ellie have more of a modern edge than Diorissimo, but even Diorissimo does not feel old-fashioned. To me, anyway. If it feels old-fashioned to you, don't tell me, I don't even want to know.

I was a bit alarmed that Ellie was being released in Parfum (extrait); the Eaux de Parfum that Michel Roudnitska has created for Parfums Delrae are strong, and I should think that Amoureuse in extrait would just about cause a dead faint. As it turns out, I needn't have worried. My one complaint about Ellie is that it is awfully light for a Parfum. It isn't quite as strong as Debut, in fact, it has less sillage, and the lasting power is about the same, maybe even a little less. I am generally too cheap to shell out for Parfum so I would have much preferred that Ellie was in Eau de Parfum, but I certainly would not like to see it any quieter than it already is.

Ellie D Ellie is $180 for 15 ml Parfum. For buying information, see the listing for Ellie D under Perfume Houses.