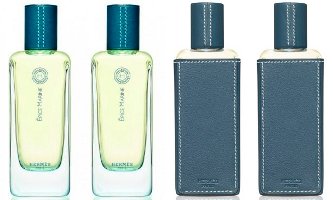 A new fragrance in the upscale Hermessence range from French house Hermès always makes me happy, even when I don't love the juice — it's pretty rare that one has bored me, although it has happened. The new Épice Marine is number 11 in the series, and it falls squarely in the very-interesting-but-don't-adore-it category, which makes me even happier; as I pointed out in my review of Jour d'Hermès, the brand has taken the lion's share of my perfume spending already. I will be perfectly happy with the 15 ml travel size I have already purchased, and presumably Hermès will continue to prosper even if I don't shell out for the full-sized bottle.

So, Épice Marine. The fragrance is about spices and the ocean: it was developed in a collaborative process between Hermès house perfumer Jean-Claude Ellena and Breton "pirate chef" Olivier Roellinger, and was inspired by their mutual love of spices and the smell of the sea. Ellena referred to it as a 'Pirate Hermessence',1 which seems fitting enough, although it's a quiet sort of pirate — most of you know already not to go looking for a big statement perfume from Jean-Claude Ellena. I do not know the "official" notes for Épice Marine, but notes mentioned in the many articles2 on the subject include bergamot, roasted cumin, mint, cinnamon, cardamom, Sichuan pepper, algae, whiskey (or maybe rum), smoke, sea breeze, fog, oakmoss, polished wood, and maybe some flowers.

If you are familiar with Ellena's work and particularly the Hermessence series, you can probably already imagine the result: it's a mingling of salty sea notes (heaviest in the top notes, and more salty / iodine-y than "fresh" — this is not your father's aquatic cologne) and plenty of peppery spice, but in the transparent style that is Ellena's hallmark. The opening is lively, with the sea notes mingling with crisp citrus; the dry down is quieter, more contemplative. The later stages could be aptly described as foggy, and make a nice match with the grey-blue color of the packaging. There is a faint hint of smoke, but only faint, and I do not notice any whiskey and/or rum, although possibly that is the only meant to be the origin of the smoky notes.3 Yes, the cumin is noticeable regardless, but I did not find it sweaty à la Cartier Déclaration or Frédéric Malle Cologne Bigarade. The base is soft woods, smelling appropriately aged and weathered by the elements.

Verdict: Like all the Hermessences, Épice Marine manages to be both interesting but perfectly wearable — there is nothing weird or difficult about it as a personal fragrance, and you won't feel like it is wearing you.4 I found it very enjoyable to wear but never completely fell for it, although it may perhaps continue to grow on me, as did Brin de Réglisse — I reach for that one far more often than I ever thought I would.5 As is the case with all the fragrances in the series, this is not the place to go looking for a product to last through your work day, which is another way of saying that the lasting power is about average for a Hermessence.

A quick poll for anybody who managed to read this far: name your favorite fragrance that reminds you of the sea? It doesn't have to be an aquatic.

Hermès Épice Marine is available in 100 ml Eau de Toilette, or in a 15 ml bottle sold in mix 'n match groups of 4. There is also an optional leather case, shown above, if you want to pay extra for it.

You can find more reviews of Épice Marine at Bois de Jasmin, Grain de Musc and Sorcery of Scent.

1. Via Behind the scenes of Hermès new fragrance at AMDmode.

2. There is a long article at the French version of Vanity Fair and another at The Telegraph, and you will find plenty more if you Google.

3. The particular whiskey Roellinger apparently recommended to Ellena was the single malt Bruichladdich.

4. Another quote from AMDmode: "...Hermes is different, as they give me the freedom not to be a copy or to follow a trend just to market a product. That doesn’t mean that we produce items or perfumes, that doesn’t work or doesn’t appeal for the market, we always make sure that what we produce is appealing..."

5. And I said the same of Santal Massoïa — maybe it will grow on  me. But no, it never really did. I like it when I wear it, but I don't swoon.