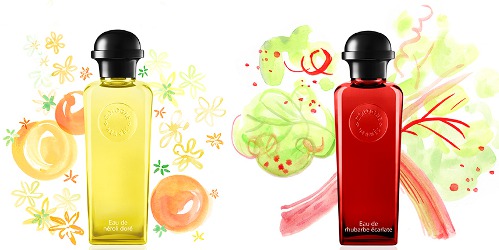 Eau de Rhubarbe Écarlate and Eau de Néroli Doré are the latest additions to 'Les Colognes' at Hermès. It is not my favorite collection — I own a lot of Hermès fragrances, but only one from this series, Eau de Pamplemousse Rose (I do also keep a small bottle of the older Eau d'Orange Verte, which was repackaged into this series in 2009). But still, I'm always glad to see something new from the brand that takes most of my perfume dollars, and I was especially curious since the rhubarb is the first fragrance for Hermès signed by perfumer Christine Nagel, who joined Jean-Claude Ellena as house perfumer in 2013.

Eau de Rhubarbe Écarlate is, as I said above, the Christine Nagel scent, and the description, "the crisp and tangy freshness of rhubarb softened with white musks", is pretty accurate — despite the brand's usual reticence about disclosing detailed fragrance notes, it pretty much tells you what you need to know. If you're a rhubarb fan, the top notes will probably please you, as they are indeed crisp and tangy, with a lovely juicy citrus backdrop and a mild green edge. After that, yes, it all gets pretty soft, and as you might suspect from the white musk, it gets pretty clean to boot, although it does not quite scrub itself into laundry-soap territory. There's a thread of wispy / sheer / pale rose-y florals, and a bit of a mild wood note.

Verdict: that red bottle is stunning, even in the 15 ml version, so I wish I loved Rhubarbe Écarlate more than I do. As it is, I like it fine, but I mostly enjoy the first 20 or 30 minutes, after that, it does not really have enough going on to keep my attention. The lasting power is somewhat better than I expected, but still, I'd rather get my rhubarb fix from the likewise summer-y but more sparkling (albeit probably shorter-lived, and certainly more expensive) Rose Ikebana. But a decent first outing, and if I weren't so cheap, I'd be tempted by the bath products that are reportedly to follow.1

Eau de Néroli Doré is the entry from Jean-Claude Ellena. The description, "the lively and generous freshness of neroli enhanced by saffron", is again accurate, but after a bright but muted opening of citrus and spiced orange blossom, the scent itself was something of a surprise. It's not Opium or Angel, of course, but for a Jean-Claude Ellena fragrance in the Cologne series from Hermès, or even for a neroli, maybe, it's dense and rich, and while it lacks Eau de Rhubarbe Écarlate's opening punch (when I first sprayed the two, I thought for sure I'd like the rhubarb better), I found it more rewarding to wear. It isn't overly decorated, and as with the Rhubarbe, the base is mild and clean, but the neroli shines in a 'bathed in golden light' sort of way that meshes perfectly with the name and the bottle color.

Verdict: I will not be surprised if the Rhubarbe Écarlate is the better seller, but the Néroli Doré is, to me, the more interesting scent. More than a summer cologne, it smells like a meditation on its namesake ingredient,2 and as such it would have fit nicely into the original Hermessence quartet (Rose Ikebana, Ambre Narguile, Vetiver Tonka and Poivre Samarcande), which was more tightly materials-oriented than the Hermesssences that followed.

I've been plotting a coffret order from Hermès but waiting to see how I liked these two. Néroli Doré will go on my short list, which unfortunately at the moment is not quite so short as the four you get in the coffret. So we shall see. Still, neither of these fragrances are likely to make their best showing during a Pennsylvania February. They are both going in the purgatory basket, and I'll take them for another spin when proper cologne weather starts. Soon, I hope.

1. And I wish I had a sample of Comme des Garçons Rhubarb (from Series 5: Sherbet) to compare, but if memory serves, I liked that one better than this. The price has gone up quite a bit since I reviewed it, but it's sold in a small size: 30 ml for $55. So it's more per ml, but to me still a better bargain than the Hermès.

2. Widely reported from the press event for the new colognes: "...Ellena explains that ‘When I started out as a perfumer I learned to distil raw materials, including orange blossom. When you enter the world of stills, you are also immersed in a scent, impregnated with it, you become it. To reproduce this sensation, where normally one uses very little neroli in fragrances, I used it abundantly.‘ So abundantly, in fact, that he says Hermès had to buy half of Morocco and Tunisia’s entire annual crop of neroli oil for the perfume." Via Wallpaper.