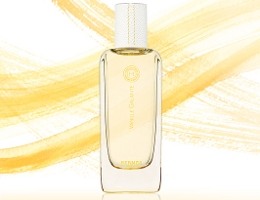 It has been a very long time since I actually swooned over the first sniff of any perfume, but the latest from the Hermessence collection at Hermès, Vanille Galante, was a rare case of love-at-first-sniff. Happily for me, so far it appears to be a lasting relationship — just as well, since I bought it unsniffed.*

I will start by mentioning that Vanille Galante is likely to be a disappointment to vanilla freaks (there have already been a few disgruntled customers on the fragrance boards). The early scents in the Hermessence series (Ambre Narguile, Rose Ikebana, Vetiver Tonka, Poivre Samarcande, Osmanthe Yunnan) were mostly "about" the material they were named after. Paprika Brasil and Brin de Reglisse were less directly so, and Vanille Galante, while presumably a reflection of some sorts on vanilla, isn't a vanilla perfume at all in the usual sense. It may not please men, either, insofar as it's arguably the most feminine in the Hermessence collection. And one final warning, this one for aquatic-phobes: I do not know if it contains calone, but it sure smells like it to me.

Like the others in the collection, Vanille Galante was created by Hermès house perfumer Jean-Claude Ellena, and if I had to sum up what it smells like in a few words, I'd say lilies floating in salty water. The opening is dewy and bright and fresh, and even more airy and transparent than Jean-Claude Ellena's usual airy and transparent. It is fruity — both melon and banana in the early stages — and liberally sugared. It's spicy-peppery early on, and lightly green. As it dries down, the lilies fade slightly into a more blended, indistinct floral, still very sheer and salt-water-y; farther on, there are hints of pale, very dry woods, lightly charred.

It sounds just like something I'd hate — melon and banana! — but it's simply gorgeous. Regular readers know I have complained about the recent resurgence of the aquatic trend (and that I did not like Ellena's most recent aquatic entry, Hermès Un Jardin après la Mousson), but if all aquatic florals could all be made to dance on the skin like this one does, I would make my peace with aquatic notes.

The first time I wore Vanille Galante, I thought it had faded entirely after an hour, but it has a way of reappearing long after I thought it was gone. Now I would say that the lasting power is good, but that it has a tendency to induce olfactory fatigue (in me, anyway, at times) rather quickly.

Hermès Vanille Galante features notes of ylang ylang, green notes, spices, lily, salicylates, sandalwood and vanilla. It is available in 100 ml Eau de Toilette, or in a discovery set of four 15 ml bottles. I'm sorry but I don't know the current prices for the Hermessences (please comment if you do), and do note that the leather sheath shown in the image above costs extra.

* But in my defense, I only bought 15 ml this time. And I shall drain it in no time.

5 Perfumes from: the Purgatory Basket