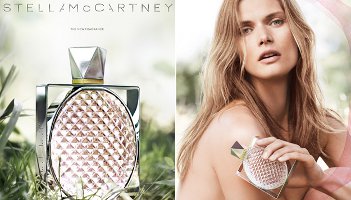 British designer Stella McCartney can hardly be accused of flooding the (perfume) market with product. Her first pillar fragrance, Stella, launched in 2003. She has followed up with a series of variations and flankers, but has not done another pillar scent until this year. The new one is L.I.L.Y, reportedly named for her father Paul McCartney's nickname for her mother — LILY, for Linda I Love You. The name also refers to the scent's lily of the valley note; according to McCartney...

I love lily of the valley; I find it to be breathtakingly beautiful. It’s also a very innocent looking flower, with a real freshness to it. I love that it blooms only fleetingly, in Spring, and that it grows in the shade, not in direct sunlight. It is fragile and innocent and delicate, yet it also has this sharp green leaf contrast. How to capture all that in a fragrance was a real challenge [...] I know it’s not particularly contemporary, and I wanted to modernise it.1

And modernize it she has. Lily of the valley gets a treatment very similar to that of rose in the original Stella perfume, and it's not surprising to learn that McCartney worked with the same perfumer, Jacques Cavallier, for both fragrances. When I reviewed Stella, I noted that...

The rose is prominent but soft, and it has a very modern feel that would appeal even to those who don't care for rose — and the flip side of that, I suppose, is that it might not satisfy someone who adores rose and has three fragrances by Parfums de Rosine.

Ditto here, and then some — anyone looking for a lily of the valley soliflore is likely to be disappointed, as L.I.L.Y is no such thing. The opening is the most lily of the valley you'll get: it's fresh, green, a little sharp, and rather peppery (the notes include pink and black pepper, as well as lily of the valley, truffle, oak moss, patchouli, ambrette and white musk). It softens quickly, and the lily of the valley, which is already a little vague to my Diorissimo-trained nose, gets vaguer still — in other words, more general spring-like floral, less lily of the valley. L.I.L.Y is also earthy and mossy, but in the modern, clean sense, without any skank or mustiness. Still, it's darker and drier the longer it's on skin, although it never gets very dark or very dry; in keeping with current fashion, it's not a heavy fragrance in any case.

I like it; I like it even more after it's been on skin a good hour or so. Like Stella, it's casual and unfussy, but here the earthy base gives it just a bit of a sexy edge. If you're after a seasonless floral but have found the recent spate of powdery florals (Cartier Baiser Volé et al.) too prissy and the heavier alternatives (Tom Ford Violet Blonde and friends) just too much, L.I.L.Y is very much worth a shot. 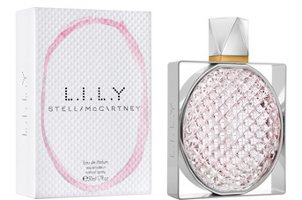 Stella McCartney L.I.L.Y is available in  30, 50 or 75 ml Eau de Parfum; a 10 ml roll-on and matching body products are reportedly to follow. The fragrance will not debut in the United States until September, when it is expected at Sephora.