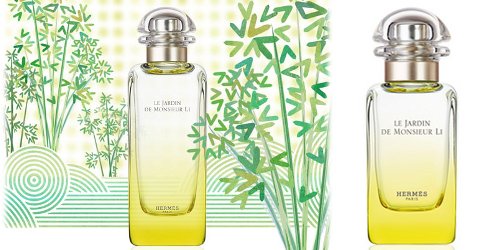 "I remembered the smell of ponds, the smell of jasmine, the smell of wet stones, of plum trees, kumquats and giant bamboos. It was all there, and in the ponds there were even carp steadily working towards their hundredth birthday." — Jean-Claude Ellena1

Le Jardin de Monsieur Li is the fifth fragrance in the Jardin series from Hermès, and reportedly the last.2 I do not know if it is also the last scent we'll see from perfumer Jean-Claude Ellena, but either way, smelling it gave me an advance pang of nostalgia. I will miss Jean-Claude Ellena when he retires.3

Le Jardin de Monsieur Li is an aromatic citrus, reportedly inspired by a Chinese garden. The notes (something like kumquat, mint, jasmine and sap) sounded tantalizing, but as is often the case with Hermès and Jean-Claude Ellena, the juice is not quite what I expected. The opening is indeed a tart orange, although much rounder and softer than I'd imagined, and nothing like so effervescent or intense as some of the brand's grapefruit-heavy citrus top notes. If you're looking for the mouth-puckering first bite of a ripe kumquat, I don't think you'll find it here, and in any case the tartness is relatively short lived. After that, think of the most gauzy and transparent Jean-Claude Ellena fragrance you can, and then make it even more soft-spoken. Everything past the opening is like a whisper, or a meditation, or a garden seen through the haze of a long-ago memory. To my nose, it is easily the mildest fragrance in the Jardin series.

So the jasmine is soft and rather watery — I thought of lotus before I thought of jasmine. It's a clean, very modern take on the flower: no indoles, light as a feather. There is a glimmer of pale green, without the herbal edge you might expect from a conventional aromatic citrus, and certainly nothing I'd immediately identify as mint, although you may find it if you go looking for it. The dry down is the palest of pale woods, still faintly green, and again, clean, with a vague murmur of the "wet stones" mentioned above (think of the mineral effect from the base of Terre d'Hermès or Voyage d'Hermès, but far gentler).

On a paper blotter, Le Jardin de Monsieur Li lingers for a few hours. On skin, not so long as that. It's a summer-y fragrance, done in balmy, washed-out pastels that are all wrong for the (ridiculous) weather we're having now. Perhaps it will do better when there's more heat and humidity in the air. I wouldn't bank on it, though.

Verdict: I think it's simply lovely. I'm surely anthropomorphizing even more than usual, but it struck me as having a wistful aura — and a spareness, or economy of notes — that seems a fitting end to the series that started with the far livelier and more direct Un Jardin en Méditerranée. It's the closest yet to a true haiku, even more so than the Hermessences, and I fully expect that many will find it too insubstantial, and many others will find it too short-lived on skin. You know who you are — and I wouldn't buy this one unsniffed anyway. It's going on my buy list and I'll hope it eventually appears in the 15 ml bottles (all the other Jardin fragrances are sold that way now, in the "pocket sets" of four 15 ml bottles). A body milk would be perfect as well. 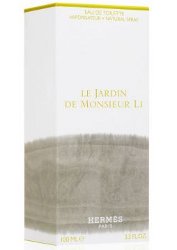 Rose Amazone, which launched late last year, is not going on my buy list, but I was not a fan of the original Amazone anyway.4 They've basically taken the top notes and replaced them with Jean-Claude Ellena's signature punch of effervescent sour grapefruit, rounded out with sparkling, sweet-but-not-too-sweet red fruits (there is still plenty of black currant) and a touch of bitter greenery. The ad copy promised cheerful, and that's just what it is. The longer it's on skin, the closer it gets to the original Amazone, or at least, the latest versions of the original Amazone. I should think fans of that fragrance might want to give it a shot.

2. Or so says the UK version of Harper's Bazaar.

3. In case anybody missed the news, he is to be replaced by perfumer Christine Nagel.

4. Victoria at Bois de Jasmin called the original Amazone "an example of an utterly sophisticated and elegant fruity floral"; you can read her review here.