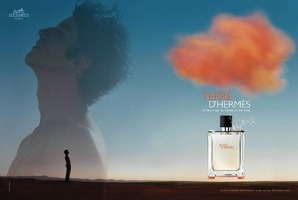 Terre d'Hermès is the latest fragrance for men from Hermès. It was created by perfumer Jean Claude Ellena, and it is worth repeating the fragrance description I posted back in December:

The vegetable and mineral juice, made without animal by-products or musk, sparkles with orange (specifically formulated for Hermès by Albert Vieille) and grapefruit that blends with flint for a mineral note, and combines with pepper, bay rose, geranium, patchouli, benzoin and vetiver around the central note of Atlas cedar to enhance its Earthly tones. (via cosmeticnews)

According to Escentual, the fragrance is meant to be the masculine counterpart to Hermès Eau des Merveilles: "This is for the man who has his feet firmly on the ground, but his head is in the stars."

What struck me when I smelled Terre d'Hermès was how accurately the smell of the finished product could be determined by the information given above; a rare thing, since most official perfume descriptions leave me scratching my head and wondering if the writer had actually smelled the fragrance. That is not to say that it wasn't a surprise, because it was, but it was the sort of surprise that comes from ignoring the obvious. It smells very much like a Jean Claude Ellena fragrance (minimalist, comparatively transparent), it smells like all of the notes listed in the description, and while it smells nothing like Eau des Merveilles, they share a similar kind of feeling: an airy outdoorsiness, the smell of warm skin, and a kind of clean finish that happily doesn't evoke laundry soap.

So my description of the scent itself is sort of superfluous: it starts with citrus, sparkling and mildly sweet, and nothing like so sharp or high-pitched as Jardin Sur Le Nil. Then comes a whole rush of notes all at once: pepper (lots), cedar (ditto) and patchouli (thankfully subdued). Over the next hour, everything blends and softens and gets more indistinct. There is warm earth, and warm rocks, and wood, and a brief hint of greenery. After an hour or so, there is the suggestion of smoky-dusty gunpowder.

It is not a deep fragrance, exactly, but nor is it wispy and ethereal; it is somewhere in between, and fairly accurately corresponds to the image of a man with his feet on the ground and his head in the stars. It certainly has a more forceful presence than Eau des Merveilles (and better lasting power). I should not think it is too masculine for a woman to wear, but will be very interested to see what others think on that subject. For that matter, I always thought Eau des Merveilles was unisex, and was surprised to discover that Hermès lists it on their website as a women's fragrance.

It is beautifully done. The primary reason that I am such a huge fan of Jean Claude Ellena is that he always knows when to leave well enough alone. It is very nice to see that the first major fragrance release from Hermès since Ellena became the in-house nose reflects that, and I hope we will see the first major fragrance release for women very soon.

Terre d'Hermès will be available in 50 and 100 ml bottles of Eau de Toilette. I forgot to ask about the price when I was at the boutique, if you know, please comment. I'm sure I'll end up buying it regardless. I believe most of the Hermès boutiques in the US are to have it in stock by March 13.

Bonus: if you missed it earlier, check out the Terre d'Hermès website [no longer active, sorry!], which as of this moment is still ticking down the seconds until the fragrance's official release on March 4.