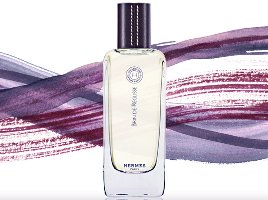 Brin de Réglisse is the seventh fragrance to join the Hermessence collection from perfumer Jean-Claude Ellena at Hermès. As I reported last month, Ellena hoped to "create an intense, dry lavender, like you would smell in the south of France in June or July" (other notes include licorice, orange blossom and hay); to accomplish that, he...

...turned to his colleagues at an independent perfume lab in Grasse. He asked them to slice natural lavender into 50 distinct groups of molecules, sniffed them all, discarded five and reassembled it. "My lavender had a much purer, cleaner smell," he says, comparing it with the natural scent. "Then I had to find something to dress it up that would be a little unusual. I chose a touch of licorice." (via Los Angeles Times, 10/28/2007)

The end result is a lavender that is intense and dry, but without the harshness sometimes associated with a heavy lavender top note. In Brin de Réglisse, the lavender floats along by itself for a few minutes before the licorice joins in. The licorice is faint at first, then briefly thick and chewy and dark before turning sheer again (at no time does it get overly sweet). I don't notice the orange blossom or hay until after the licorice calms, then there they are, all at once, with the hay at first dry and freshly mown, then later, deeper and sweeter, with a touch of vanilla and the merest smidgen of mild leather. Once the hay, in its turn, calms, the lavender, which I had thought long gone, comes back out of hiding, now very soft, and lingers on through the end.

Lee over at Perfume Posse described Brin de Réglisse as "a series of diaphanous veils, one lifted or completely removed to reveal more fully the next transparent layer", and that is perfectly apt; it doesn't seem to follow the typical pyramid structure so much as it seems to change course entirely several times over the course of its development. The reviews I've seen so far have been less than wildly enthusiastic, but I like it very much — not so much as Vetiver Tonka or Osmanthe Yunnan, which share top honors for my favorites of the Hermessences, but still, it is really beautifully done, and I find it much more interesting and unusual than the last entry in the series, Paprika Brasil. Like Vetiver Tonka, it seems to strike the perfect balance between sweet and dry notes, and to use edible notes without quite descending into foody (although early on, I do want to eat that licorice). I'm going to need a bottle eventually.

Brin de Réglisse is on the sheer side, and stays rather close to the skin after the top notes fade. The lasting power is less than impressive from my sample vial; perhaps it does better sprayed (and applied lavishly). One can always hope. I do think it will wear better in spring than in the cold weather we're having at the moment.

Hermès Brin de Réglisse, like the other Hermessence fragrances, is exclusive to the Hermès boutiques. It is available in 100 ml Eau de Toilette or in a set of four 15 ml sprays (the "discovery set"). The bottles are tinted lavender; the leather cap is a dark grape color. The optional leather sleeve, which can be personalized with the owner's initials, is sold separately.