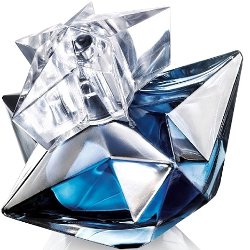 We all complain about flankers, and they're an easy mark: there are too many of them (really, WAY too many of them) and the general tendency of flankers, of course, is to dumb down, or sportify, or summer-ize, or oud-ify, or otherwise attenuate a possibly already less-than-marvelous pillar fragrance. But I'm sure I'm not the only one that has a few flankers I like better than the original. Here are my five picks,1 do share yours!

Tops on my list is Givenchy's Organza Indecence. I never did care, either way, about Organza. I'm sure it has many fans (do raise your hand!) but it never appealed to me. Organza Indecence, billed as Organza's "vampy little sister", is a fabulous spicy woods that shows little obvious relation to its big sister floriental, much less to its namesake fabric, or for that matter, to indecency — it is sort of sexy, yes, but it works best as a comfort scent, and I'd wear it with anything from flannel to cashmere to an old sweatshirt.

I'm sure I'm not alone in loving Christian Dior Hypnotic Poison while having, let's say, respect, at most, for the original Poison (I said in my review of Poison that "it is far, far easier to appreciate its good points now that everyone on earth isn't wearing 2 sprays too many"). As with Organza Indecence, Hypnotic Poison has little enough in common with its older sister, and also like Organza Indecence, it's both sexy and comforting. I should add that I hear that Hypnotic Poison is not quite the wonder it once was, but I have avoided trying the latest formulation so I can't comment.

Thierry Mugler Angel Liqueur de Parfum was a limited edition 2013 release,3 but they're still selling it over at Thierry Mugler, and I've been vacillating about buying it ever since it came out (and to be clear, I have never for even a second considered a purchase of the original Angel). Richer and sweeter than the original, and beautifully boozy, but also mellower, with fewer rough edges. I might just be talking myself into a purchase.

When I reviewed Prada Infusion d’Iris Absolue, I said it was gorgeous, yet I wasn't sure but that I'd still wear the original Infusion d'Iris more often even if I owned both. Now that I've owned both scents for several years, I can tell you that it's the Absolue I usually reach for, in fact, it might be the single iris fragrance I wear most often.2 It's noticeably deeper and richer than the original but not overwhelming or difficult to wear — it still works with the "veil of scent" concept.

Everything I said about the Prada goes as well for Hermès Jour D'Hermès Absolu. It's deeper, richer, more full-bodied than "regular" Jour d'Hermès, and if I ever drain my bottle of the regular, I'll buy the Absolu.

1. Erin wrote a similar post back in 2009, 5 Perfumes for: a Flanker Skeptic. Maybe my post is the flanker to hers? Her criteria were not quite the same: she was writing about decent flankers but not necessarily flankers that bested the original. Still, we shared 1 pick: the Givenchy, and while Hypnotic Poison did not make her list, she did talk about it.

2. And that made me think about how misleading, in some ways, the scent of the day posts are, since I'm sure I'm not the only perfumista who doesn't end the day in the same perfume I was wearing in the morning.

3. Update...just to clarify, the bottle shown at top is actually the 2009 release of Angel Liqueur de Parfum and that is the one I reviewed. It was released again in 2013 as part of the Les Liqueurs de Parfum collection. The 2013 version, which I have not smelled but which I assume is at least close to the 2009 version, is the one that is still for sale.