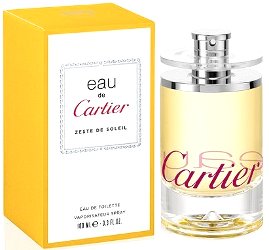 Hey, who doesn't need a little zeste de soleil right about now? (If it's warm where you are, no bragging please!) Zeste de Soleil is the latest flanker to Cartier's Eau de Cartier, a fragrance I've always liked but never adored quite enough to buy a bottle. It joins Eau de Cartier Essence d'Orange (which was not as wonderful as I hoped), Eau de Cartier Essence de Bois (a great pencil-shavings scent darkened with a drop of oud) and Eau de Cartier Goutte de Rose (which I have not smelled — do comment if you have).

Zeste de Soleil is apparently meant to be the exotic-slash-tropical entry in the series; it adds passion fruit to the original mix of yuzu and mint. The top notes are the perfect antidote to the grey, dreary, rainy weather we're having here lately: an energetic burst of what smells like flash-frozen grapefruit peel — it's very bright and very yellow, and I'm surprised they did not use the perfume-speak term 'crystalline' in the description. They did call it refreshing, sunny, radiant, joyful and invigorating (among others); perhaps that was enough, and I'll vouch for all of it. The passion fruit appears after a couple seconds, and Zeste de Soleil gets sweeter and fruitier, but thankfully remains close by classic cologne territory instead of veering into fruity floral. It's lively and vibrant, and it stays that way for at least the next half hour or so. The mint is not heavy but it's there, and the dry down has a greenish, herbal cast over a pale woody musk. I wish I had some of the original Eau de Cartier to compare; going on memory, it's reasonably similar.

Verdict: great fun, although admittedly, much of the fun is packed into the first 30 minutes. What's left after 2 hours is nice enough, what's left after 4 is verging on bland — about what you would expect from a summer eau. If it came in a smaller size, I'd consider adding it to my buy list, but it is not, for me, 50-ml-worthy. Still, I wish I had an automatic diffuser to spritz some in the air every 15 minutes or so for the rest of the winter; it would cheer me up immensely. 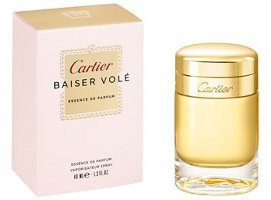 Baiser Volé Essence de Parfum came out last fall. I believe it's the fourth iteration of Baiser Volé — it comes after the original Baiser Volé Eau de Parfum and its followups Baiser Volé Eau de Toilette and Baiser Volé Extrait de Parfum. We've already reviewed the first three so it seemed superfluous to do a full review of another. Here's the quick version: it's Baiser Volé's transparent lily rendered richer and warmer, with a more subdued green note and a hefty dose of creamy vanilla taking it straight into oriental territory. It's softer and less crisp than the Eau de Toilette, deeper than the Eau de Parfum, and going on memory, less earthy than the Extrait de Parfum. And it's by far the sweetest of the bunch. It's beautifully done and I found it very enjoyable to wear, but if I was going to buy a bottle of Baiser Volé it's not what I'd choose.

If you like the idea of vanilla + lily but Baiser Volé Essence de Parfum is too heavy or sweet for you, you might want to try Hermès Vanille Galante.