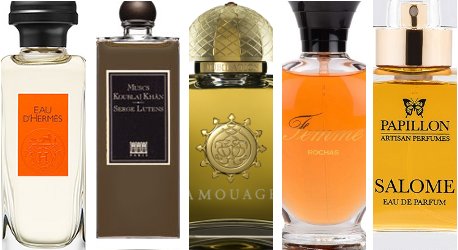 Ready to wade into skanky waters but want a little hand holding? You’ve come to the right place. “Skank”1 usually refers to a hint — and sometimes more — of body odor in a fragrance, occasionally with overtones of halitosis and rotting flesh. (I hope you aren’t eating lunch right now.) Artfully administered, skank can throw a perfume’s beauty into relief. It can feel intimate and sexy. But when you’re not in the mood for it, skank could be just plain disgusting. Skank tolerance is personal. Some perfumistas wear their skank as a badge of honor, like chile lovers brag about downing Scotch Bonnets, but others won’t tolerate a noticeable drop of civet or funky musk.

Here is a skank sampler. Please comment if other skanky perfumes come to mind. I’ve rated them on a Skank Scale of one to ten. One approximates “post-tennis glow,” and ten is “zombie apocalypse.”

In August in Paris this year, I encountered plenty of ripe metro riders. I simply told myself they were wearing Eau d’Hermès. Eau d’Hermès is a classic, expensive-smelling cologne full of citrus and lavender — and skank. Imagine a gray-templed man emerging from a country club. He just played a vigorous round of golf and enjoyed the post-game Old Fashioned, but — whoops! — he forgot his Ban roll-on. That’s Eau d’Hermès. (Related: see Guerlain Mouchoir de Monsieur.)

Skank Scale: 9 for the first half hour, steadily declining to 2

It could be a cry at football games attended by perfumistas: “Give me a skank!” the cheerleader yells. “MKK!” the crowd roars back. Yes, this one is a real stinker. Somehow it blends unwashed armpits and “private” parts with the breath of a smoker with gum disease and day-old roast beef between his molars. For years, I feared to be alone with a bottle. What if it dragged me to the grave? Then I was in the Salons du Palais Royal in Paris, and the sales associate cooed about MKK, describing it as an elegant skin scent. By then, I’d built up a tolerance for skank, so I gave it a go. Surprise! This time I appreciated the fragrance’s comfort and intimacy — MKK is almost cuddly in the dry down, where it wafts caramel-leather and tobacco and is vaguely powdery. I still wouldn’t wear Muscs Koublaï Khän in public, but every once in a while I crave a spritz.

How I love Jubilation 25. It brims with everything good from an exotic greenhouse, with a thick cloud of jasmine wrapping it up and depositing it on delicate wood and moss. A thin vein of tingly fruit travels through Jubilation 25 — not enough to call attention to itself — and, yes, it whispers “skank.” Jubilation 25 is fine-tuned sexy: expensive, expertly built, unfiltered. It’s too proper for Mata Hari, too sensual for Grace Kelly, and too smart for your average silicon-lipped starlet. Perfectly wearable in public in modest doses.

Don’t have the budget for Jubilation 25? Try Femme. It’s a little fruitier, but that makes it more delicious. It’s a little more straightforward, but so are the most successful sweater girls. For me, Femme is the go-to skank for autumn. I save Jubilation 25 for special occasions when the audience is right, but I happily wear Femme afternoons raking leaves or reading old detective novels.

Salome is a skanky floral chypre with the skank just barely outweighing the flowers. Its skank is salty and hints at lady parts. A layer of minerally moss buoys it. I haven’t tried Salome sprayed, but dabbed from my sample vial it wears dense and velvety, with amber and spicy carnation coming out as the fragrance settles in. It’s not as easy to wear as Femme, and it’s more punk rock and not as classically glorious as Jubilation 25. Salome would be a good one for winter nights when you’re out late at a show.

For buying information, see listings for Hermès, Serge Lutens, Amouage and Rochas. Papillon Perfumery can be found in the US at Luckyscent or in the UK at Les Senteurs.

1. “Skank” as a perfume descriptor is generally credited to March at Perfume Posse.