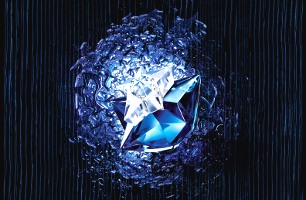 Angel was a huge success for Thierry Mugler. It continued to sell long after the fashion line fell out of favor, and even after the fashion line disappeared altogether in 2003. So it's no surprise that the flankers have been many. Some of them did quite well on their own (Angel Innocent was so popular it ended up with its own line of flankers) and many perfumistas loved the Garden of Stars series, especially the Rose Angel.

In 2007, Thierry Mugler released Angel La Part des Anges. Perfumer Françoise Caron had reworked the original Angel juice, adding dried fruits in the opening and amber in the base. Then they'd put it through an aging process devised in collaboration with cognac firm Rémy Martin, whereby it was aged in cherrywood casks for a period of weeks (some sources said 12, others 23). They sold it in Parfum, in a Swarovski studded bottle, at $220 for 10 ml.

I smelled it at Bloomingdales that year, and was quite taken. Not for a moment did I consider spending that much on it, but months later I was still thinking of it — a sure sign that something ought to be in one's collection, no? So I was very excited last year when I heard about the then-upcoming Angel Liqueur de Parfum.

Angel Liqueur de Parfum opens on rich, boozy fruit notes. It's recognizably Angel from the outset, but the early stages especially are smoother, less jarring, and I cannot emphasize enough how boozy it is — as was the case with the La Part des Anges, I want to drink it as much as I want to smell it. The dry down is still rich, but it's mellower than Angel: a bit less patchouli, a bit more smooth woods. Likewise, it's still sweet — possibly even more so — but there's less chocolate (if any) and less caramel; it's the sweetness of honeyed dried fruits rather than the cotton candy and other childhood treats of Angel. I don't know that Angel really evoked a childhood fairground for me, but the Liqueur de Parfum certainly does not. As was the case with Angel, sometimes I find the far dry down smoky, sometimes I don't.

If I'd thought of it, I'd have included Angel Liqueur de Parfum on my Best of 2009 list. It's definitely going on my "to buy" list, although as usual, I'm going to wait to see if it shows up at the discounters. Angel fans: do try it, but don't buy it unsniffed unless you don't mind sweet — I've seen quite a few comments from people who much prefer the original. Everyone else should give it a shot too, and especially anyone who almost loves Angel but finds the opening too rough or the patchouli too heavy.