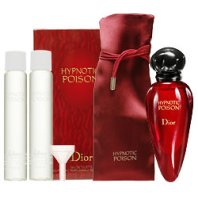 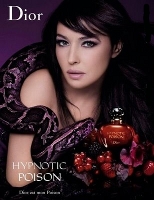 Yesterday's subject was the original Christian Dior Poison fragrance and the follow-up effort, Tendre Poison; today I am continuing with Hypnotic Poison.

Christian Dior launched Hypnotic Poison in 1998, four years after Tendre Poison. Created by perfumer Annick Menardo, the fragrance is designed around four accords instead of the traditional top, middle and base pyramid:

Those are a bitter almond-caraway accord, a sambac jasmine accord, a moss-jacaranda wood accord and a vanilla-musk accord. The jasmine is particularly potent...It's also the link with the original Poison. (via Women's Wear Daily, 7/10/1998)

Hypnotic Poison was also the first fragrance released after John Galliano was brought in to revitalize the fashion side of things at Christian Dior, and was meant to resonate with his modern, theatrical design aesthetic; to portray a woman as "eternal seductress, using all the weapons of seduction". (ibid.)

Although Hypnotic Poison returns to the oriental themes explored in the original Poison, they don't smell alike in the least. Hypnotic Poison is a creamy-sweet concoction of vanilla sugar, jasmine, and musk, with a velvety finish and a dash of spice. The nutty-woody undertones temper the sweetness perfectly: it is edible without feeling at all cloying or overdone, and does not, like so many of its gourmand compatriots, smell too young and sweet for a grown woman to wear, despite the fact that it is often compared (accurately) to the smell of root beer.

As for sexy, well, I suppose it is. But in stark contrast to Poison, which you might wear out on the town in black leather and stiletto heels, Hypnotic Poison is at home in front of the fireplace in a cashmere sweater, and more interested in a leisurely breakfast in bed than a night of intrigue and adventure. Whether that succesfully ties in Galliano's fashion, I cannot say, but it gets my vote for the most appealing of the four Poisons.

Christian Dior recently released the Poison Amulets. These are limited edition 15 ml purse sprays in Poison, Pure Poison, Tendre Poison and Hypnotic Poison (shown above); each comes with 2 refills and is packaged in a satin pouch with funnel. They can be found at sephora or at major department stores, and run $50 each; if you can wait, they might turn up at discount eventually. If you prefer the original fragrance packaging, you can find a 30 ml spray of Hypnotic Poison for $28 at scentiments.

I meant to include Pure Poison today, but am running late (as always), so look for a review tomorrow.