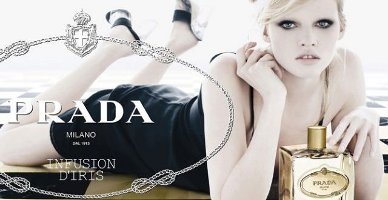 I love Prada's Infusion d'Iris. I bought a bottle when it launched in 2007, and it's nearly drained — that probably doesn't seem too impressive, but I own a lot of perfume at this point. To finish off anything, I must really like it.

I haven't been so fond of the flankers (the Prada "Ephemeral Infusions") and I didn't see the need for the Eau de Toilette version of the original Infusion d'Iris, which was more citrusy and floral, less "rooty" — the rooty / earthy part of iris is the part I'm generally after (although mind you, Infusion d'Iris was not a root-fest in the manner of some iris fragrances). So the newest iteration, the Eau de Parfum Absolue, was more likely to appeal, and yes, that's just how it turned out.

Like all the others in the Infusion series, Infusion d'Iris Absolue was developed by perfumer Daniela Andrier. It starts with a whisper of citrus and orange blossom (thankfully without the orange baby aspirin effect that annoyed me in Infusion de Fleur d’Oranger), but from the outset, it's a deeper, richer fragrance, with a heavier concentration of iris. The iris itself is slightly earthier and rootier, just the way I like it, and almost as buttery-smooth as Chanel's 28 La Pausa.1 It's also sweeter than the original Infusion, but it's not so sweet (or woody) as, say, Van Cleef & Arpels Bois d'Iris. It isn't as clean as the original, or as green, and while it isn't what I'd call heavy, it doesn't have that same transparent "veil of scent" feel that has characterized the whole Infusion series to date.

Do I like it better than the original? That's a hard question to answer. The original fits into a very particular niche in my collection — it's light and airy, and you can wear it anywhere, anytime. The new Absolue is gorgeous, arguably more gorgeous than the original, but I don't think I'll necessarily wear it as often. Still, it's worth having, and I'm very thankful to the kind reader who passed on her unwanted decant. When I drain that (and I will), it will go right on my "to buy" list, and we'll see if I ever really purchase it.2 I will say that it smells every bit as luxurious as iris fragrances that cost far, far more (and are way harder to get your hands on).

Oh, and the gold bottle is stunning.

As a side note, I'd love to know how Infusion d'Iris Absolue compares to Prada's No. 1 Iris, but I no longer have that one on hand. If anyone has compared them, do comment!

Prada Infusion d’Iris Absolue is available as a limited edition, in 50 and 100 ml Eau de Parfum Absolue. The 100 ml is $117; I have not yet seen the smaller size in the US. The notes include orange blossom, neroli, iris, tonka bean, benzoin, vanilla and white musk.

1. It's hard to describe this particular iris without resorting to comparisons with other iris perfumes, so apologies to those who haven't smelled them and therefore have no idea what I'm talking about. But for iris fans, I will add that it isn't as nearly as "dirt-caked roots" or "turnip-y" as Serge Lutens Iris Silver Mist.

2. Long-time readers know I don't always end up buying everything on my buy list, and if I did, my already too large collection would be even more ridiculous than it is. I do try not to buy anything that isn't on the list, but like many people, my buying is sometimes driven by impulse more than careful consideration.