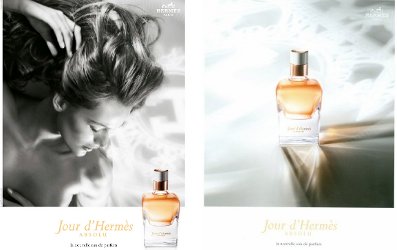 So how much do you care about a perfume's lasting power? If it's an important issue to you, you probably weren't impressed with Jour d'Hermès, the 2012 release from French luxury brand Hermès. I've seen it described as radiant, and translucent, and luminous (all fitting adjectives for a scent from from perfumer Jean-Claude Ellena), but nobody claimed it was a powerhouse. Personally, lasting power is only rarely a concern of mine. I'm disappointed if a perfume fizzles out in 45 minutes, but I'm not at all concerned if a perfume doesn't make it through the day — ideally, I'd like a perfume to smell lovely for about 4 hours and then disappear altogether. I'm not sure if Jour D'Hermès actually manages a full 4 hours, but it comes close enough for my purposes.

Still, a slightly more full-bodied version would be appealing, and the new Jour D'Hermès Absolu sounded like it would fit the bill, and might also provide an interesting variation on the original — sort of like the Eau de Parfum version of the original Kelly Caleche Eau de Toilette. And that's about how it works out, although anyone hoping for that powerhouse, or even considerably increased sillage, will probably be disappointed.

Jour D'Hermès Absolu starts off with intensified citrus and fruit notes: there's far more grapefruit, and it's greener and rounder and fruitier. I said the original Jour D'Hermès included "fleeting glimpses of old favorites and/or not favorites (Eau de Pamplemousse Rose, Vanille Galante, Un Jardin Sur Le Toit)", here, the Pamplemousse Rose, with its tart rhubarb, is front and center, and it hangs around longer.1 I still smell a touch of apple, joined here by a bit of apricot jam.

The flowers in the heart are likewise intensified. The notes for the original included gardenia and sweet pea, for the Absolu, they've listed gardenia and jasmine. It does not matter much: the Absolu is a more full-bodied floral, as advertised, but like the original, it doesn't smell all that much like any particular flower — it smells stronger than the original, and different, but I'd be hard pressed to tell you what floral note is intensified, although the apricot undertones, which do linger into the dry down, almost-sort-of recall osmanthus. The base, which was rather pale in the original, is warmer and earthier, although only just so much and no more: to my nose, it's still a perfume for spring or summer.

Verdict: I think the Absolu is gorgeous, but I'm not at all convinced that it will be universally loved, and I'd love to hear comments from anyone who has smelled it! In particular, if you didn't like Pamplemousse Rose, I wouldn't think you'd like this one either.

I bought the original Jour D'Hermès on a whim, because I was in the Hermès boutique and I liked it. I'm not sure it would have made my buy list if I'd taken a sample home and lived with it for awhile, but two years later, it's hard to say for sure — I do wear it fairly regularly. I like the Absolu much better, and I'm convinced it would make my buy list regardless. But I can't justify owning full bottles of both versions, so I'll live with the one I have. If it ever needs to be replaced, I'll get the Absolu, which is only a few dollars more.

I never did smell the (more expensive) Extrait version of Jour D'Hermès, do comment if you have.

1. I never tried the Concentré de Pamplemousse Rose that came out in 2011, but now I might have to hunt some down.