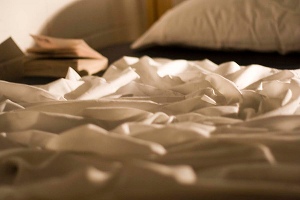 When I was pregnant with my daughter, my husband and I attended prenatal classes. Discussing strategies for birthing pains, the instructor asked us to practice visualizing our so-called "happy place", the location in each of our lives that felt the most comforting, peaceful and self-affirming. She suggested mentally escaping the delivery to a favorite beach, a summer cottage or a honeymoon hotel in Europe. My husband frowned at me sternly. "Are you visualizing being in bed?" My guilty look confirmed this. "Not helpful.  You're going to be in a bed," he said, shaking his head, "and it won't be restful." I try to make a point of acknowledging the occasions when he is right, and boy, he was spot-on that time.

Luckily, no labor, viral illness or bout of the vivid nightmares to which I am prone has ever lastingly tainted the experience of my bed for me. It seems only natural to perfume that place of refuge, my land of dreams. Sometimes, close friends or relatives ask why I bother spritzing or dabbing scent on at night, just before I fall as insensible as a stone. It is hard to describe to someone who is not a fragrance fanatic the secret joy of waking in the wee hours, when the world is black and hushed, to snuffle at your wrist. Or the feeling of well-being that comes over you on a sun-washed weekend morning when you wake up under a gently-scented duvet.

Before today and to those outside my family, I had never confessed that perfume has found a way to invade my REM sleep. Just last week, my alarm woke me from a dream in which I was attending a very surreal launch for Humiecki & Graef's new fragrance, Clemency. Despite the fact that this is a perfume created to communicate "the exaltation of the mother figure", my unconscious produced a fashion-show style video montage of Tom of Finland images to accompany the distribution of samples. While the two of us went through our early morning routines, I described the unusual content of the dream to my husband and voiced the fond, not unreasonable hope that whatever bizarre promotion my brain had come up with for Clemency, Humiecki & Graef would best it with some website content that was crazier. It has only dawned on me now that it is strange that any spouse would listen to this without expressing dismay, disinterest or surprise.

To pay tribute to his patience with my fragrance obsession, then, as well as to explain something about my sleep-scenting habits, I should point out that my husband has moderate to severe asthma. It is embarrassing to admit that before his disease was well-controlled, a few unwise sample choices I made at bedtime caused him to have nerve-rattling nighttime attacks. For his sake, I no longer test any new or sillage-heavy fragrances before heading to bed, and I use very discrete amounts of what I do wear.

Humiecki & Graef Geste: Returning to the subject of my favorite wacky Germans: Geste is a perfume "about intensity" inspired by a "mature woman in love with a young man" and it is supposed to evoke young and supple skin, warm bread, crisp white shirts and the mystery cougars bring to love. It contains soft amber, soft violets, soft petal (?!) and soft fir resin along with a considerable quantity of musks; these musks, while almost inevitably soft, also smell a bit like butt. Played off the soapy tickle of dryer sheets and a sweet, woody violet, the intimacy of the butt note gives the whole thing a pleasingly puzzling quality, so that I often drift off in a cozy cloud of Geste thinking "What the...?" Highly recommended to fans of perfumer Christophe Laudamiel.

Serge Lutens Santal Blanc: Several bloggers, including Kevin, have recently (re)considered this one. For me, it seems to be the sort of sneaky fragrance that rewards multiple wearings. Released in 2001, Santal Blanc is the high-water mark of two contrasting themes Mr. Lutens has further explored (less successfully, in my opinion) in subsequent export releases: the buttery pastry of his orientalist desserts (export end-point: Rousse) and his nods to the sweetness and light of  mainstream glowers like ck One (i.e. Clair de Musc). The heart is warm and richly sour, like the baking bread mentioned by its creator, and once the initial blast of fenugreek is over, the scent approaches the stupefyingly restful quality of pre-restriction Mysore sandalwood fragrances like Diptyque Tam Dao or 10 Corso Como. Still, there is something thoughtful about it, too, so that Santal Blanc is just as interesting when you wake up as it is when you greet the sheets.

L'Artisan Parfumeur Côte d'Amour: I remember trying this ECOCERT-approved scent when it first launched in 2009, on the recommendation of one of the co-owners of my favorite local perfume store. My reaction was something like: very well done, good power and complexity for an all-natural scent, with the beachy salt-air and coconut accord the thing will no doubt sell well, but L'Eau de Jatamansi is more my style. I briefly pondered the connection to The Different Company's more strident, smokier Sel de Vetiver, also created by Celine Ellena, and then I moved on to sample some weird Comme des Garçons release. Relatively recently, the same owner encouraged a perfume-blogging friend of mine to wear Côte d'Amour and then my friend wrote the sort of well-timed, ridiculously enticing review that strikes a note of inevitable, thrilling financial doom into the fragrance collector's heart. Last spring, as the weather warmed, I craved scents I can only describe as belonging to the genre of baked-good-iced-with-suntan-lotion: Thierry Mugler Miroir des Envies, Dior Hypnotic Poison, etc. Côte d'Amour falls squarely into this category, and my new bottle fills me with the sort of peace generally encountered during spa resort vacations or in television commercials for dryer sheets.

Heeley Cuir Pleine Fleur: With listed notes of violet, mimosa, birch, vetiver and soft leather, Cuir Pleine Fleur is that mental escape to a cottage heated by wood-stove and blessed by early morning birdsong. Like almost all the Heeleys, it is velvety smooth and quiet. There are early, freshening touches of licorice, mimosa and violet leaf before it settles into a warm hum that reminds me of Etro's Shaal Nur: smoky and lightly sweet, both airy and earthy, a scent to be contemplated at leisure.

Donna Karan Signature: Formerly called Donna Karan and housed in the robotic duck bottle, this was re-released as part of Karan's eponymous collection in 2008. After an intense, dramatic start of jasmine and dark, syrupy plum, Signature hushes to the soft, sueded base that seems to tie the best scents from this line together. As in Fuel for Men, there is both a paper-like flatness and a gasoline bloom and the oiled wood feel recalls that of Black Cashmere. It is rich and saturated, but dry enough to be very elegant on a man, and while it's the perfect scent for the midnight hour, it has none of the come-hither quality of other orientals.  Addictive and highly recommended.

Note: image is self portrait: still life. by fore.sight at flickr; some rights reserved.