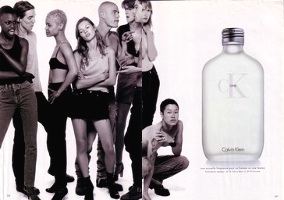 Calvin Klein released ck one in 1994. It was one of the first modern fragrances marketed to both men and women, although as was the case with the recent release of Jean Paul Gaultier's Gaultier2, the company pointedly avoided the word "unisex", preferring to call it a "shared" fragrance. It was (and still is) targeted towards consumers in the 18-24 age range, and it was a massive success, doing $5 million in business in the first 10 days alone (Women's Wear Daily, 10/7/1994), and continuing on to become the world's top selling fragrance in 1995.

He says: Admittedly, it was quite the trendsetter when it was launched, and it no doubt still holds enormous pop appeal for the adolescent population, but I can’t really find much to get excited about when sniffing ck one. Light, fresh and fleeting, ck one was one of the first fragrances to use the now over-popular green tea accord that has been copied ad nauseum. Perhaps it is because this aroma is as familiar as the scent of say, a cup of coffee, that my snobbish tastes are prevented from truly enjoying this. Nice scent, well blended, clever packaging and ultimately great for a teenager.

She says: I still recall my first sample of ck one. It came in a little metal vial with a screw-top, and looked rather like a miniature film canister. The packaging seemed like something new, and so did the fragrance itself. Of course, lots of women were borrowing from the men's counter even then, but I wasn't one of them yet, so the distinctly masculine cast of ck one was something of a revelation.

It is hard to evaluate the fragrance with an open mind today; as Marlen points out, the theme has been done so many times now that it no longer smells even slightly unusual. It is a fresh scent, heavy on the citrus in the top notes, nice kick of spices, subdued tropical fruits (it is not at all overly sweet), lots of diffusive airiness from the hedione, lots of the green tea accord made popular by Bvlgari's Eau Parfumée au Thé Vert. The lasting power is so-so, but the fragrance was and is priced to appeal to a younger audience, so hey, you can just spray on more.

And, of course, tastes in fragrance have changed. One million unisex releases later, it no longer smells quite so overtly masculine to me. My first thought on trying it again this week was: nice, maybe even nicer than I remembered, but not quite so nice as Eau Sauvage. But then, I probably owe it to ck one that I eventually figured out that I could just go ahead and wear Eau Sauvage. So thanks, ck one.

Ck one can be found just about anywhere. If you shop around, you can find 50 ml bottles online for around $25.