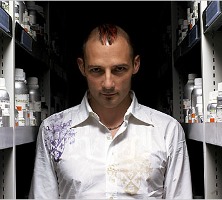 Christophe Laudamiel took a degree in chemistry before starting an internship in flavors at Procter & Gamble. He switched to fine fragrances, and worked as a perfumer for Procter & Gamble from 1994 until 2000, and then at International Flavors & Fragrances from 2000 to 2008. In 2009, he co-founded Aeosphere, a fragrance media company.

Les Christophes have collaborated on a number of unusual projects, including Visionaire 47 Taste, KyotEau: Bottled Memories, The Scent of Las Vegas, Green Aria ScentOpera, the Thierry Mugler Le Parfum coffret and fragrances for the Davos World Economic Forum in 2008.

If you walk down a busy main street there are thousands of people, but you only smell about five of them. It's not because people don't have money. They buy shoes every month and fragrances are in the same price range...People say there are so many products that they can't choose, but a CD store has thousands of CDs and people can still choose. I think the market lacks inspiration, trendiness and edgyness. I see edgier things in fashion, music and architecture...In the last 10 years what has made you say 'wow'? — From "Cosmetics International talks to Christophe Laudamiel, perfumer, International Flavors & Fragrances (IFF), New York", 12/9/2005.

One problem is that consumers are disappointed with fragrances when they don't smell how they are supposed to. Under the cover of fantasy and romance we are blurring the whole story and failing to make a connection. We need more exciting concepts too--concepts that actually appeal to the target market. The concepts today are too general and have no personality. — From "Q & A", Cosmetics International, 6/22/2007.

See all articles on Now Smell This tagged Christophe Laudamiel.

Read an interview with Christophe Laudamiel at NSTA, or an interview about home fragrance in the UK Times. Marian Bendeth interviews Le Christophs at Basenotes.