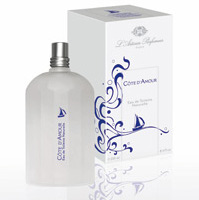 L'Artisan Parfumeur will launch Côte d’Amour in May. The new perfume has been certified natural by Ecocert, and follows 2007's L'Eau de Jatamansi, the brand's first foray into the natural perfume market.

L'Artisan Côte d’Amour will be available in 250 ml Eau de Toilette. (via amabilia )

Update: from the L'Artisan press release ~

A trip along the Loire Atlantique coast was the inspiration of Côte d’Amour, an Eau de Toilette to delight the senses: a soft caress of sea air and sand, of scents of golden yellow gorse, heather and broom, a sensual mixture of soft resin and floatwood … Reminiscent of building sandcastles, shell collecting along the beach and riding your bike against the wind. It reminds us of the memories of childhood and Holidays alongside lazy, relaxing afternoons. Its salty note, that wonderful marine odor at the heart of this eau de toilette, gives the fragrance all its personality.