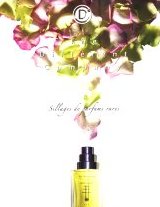 Sel de Vetiver opens on grapefruit, very pale and soft and lightly sweetened. The patchouli, though subdued in any case, is more noticeable in the top notes than later in the dry down, and there is a green herbal undertone that adds some liveliness to the early stages. As it settles, it gets warmer, dryer and earthier, and in keeping with its name, saltier.

The "scent of salt drying on the skin after bathing in the sea" was given as one of Celine Ellena's inspirations for the fragrance, and that description is as apt as any: the dry down smells very much like saltwater drying on sun-warmed skin. If I close my eyes and inhale deeply, I can make out a bit of cardamom, but for the most part, the glimmer of liveliness in the opening is smoothed over into something more quiet and hushed, in which no one note really stands out on its own.

It has markedly less presence than Ellena's prior entry in the line, Jasmin de Nuit, and in style it is perhaps more in keeping with the earlier releases from The Different Company. It is a very wearable, even enjoyable fragrance, and while I don't adore it on the same level as Divine Bergamot or Bois d'Iris, I do like it very much. I suspect that it will make more of an impact in the heat, and will certainly try it again later in the summer — especially since I have already purchased half a bottle. Reminder to self, for the millionth time: never buy fragrance unsniffed.

For buying information, see the listing for The Different Company under Perfume Houses.