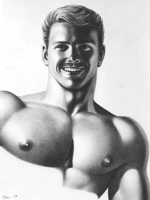 According to État Libre d’Orange and the Tom of Finland Foundation, Touko Laaksonen (a.k.a. Tom of Finland) “was one of the most influential artists of the last century” and before he began creating his beefcake illustrations in the 1950s, gay men went around lisping and limp-wristed, dressed in chiffon or dandy garb or they huddled — scared, bony and uptight — in dark corners, nervously adjusting their ties, cardigans and horn-rimmed specs. In other words, gay life, pre-Tom of Finland, was full of flamers and nerds. Perhaps Tom of Finland’s aesthetic influenced the world of fashion (and ‘gym culture’) for some gay men who hopped onto his brawny bandwagon and dressed in tight jeans and t-shirts, leather boots and jackets.

Tom of Finland begins with the scents of lemon, pine and cypress; it is lightly mentholated. The suede accord asserts itself quickly (during this stage one smells like an expensive Italian leather goods shop). Tom of Finland is a smooth, sleek and sheer leather scent that softens considerably as it ages on the skin; it becomes a bit powdery and sweet and wears down to wan saffron, tonka bean/vanilla/benzoin and iris notes — imagine a brand new black leather trench coat morphing into a pastel purple and pale yellow cashmere sweater. Tom would be appalled (he didn’t care much for “girly-men”): in the dry down, Tom of Finland has a great deal in common with État Libre d’Orange Delicious Closet Queen. I revisited Delicious Closet Queen to confirm the similarities and I also checked to see if Lie was involved in its creation (as far as I can tell, he wasn’t). Tom of Finland stays close to the skin but has good lasting power. I was about to buy a bottle of Tom of Finland after two brief applications on my forearm; when I finally applied a generous amount of the fragrance to my body I realized its leather notes were fleeting and I didn’t like its gauzy, perfume-y, vanillic phase of development. 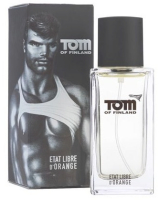 Many people have complained that État Libre d’Orange Tom of Finland lacks roughness, toughness and any hint of male “body aromas” one would imagine emanating from a Tom of Finland-type man, but to me, the Tom of Finland man, like the fragrance, is clean (almost wholesome), wrinkle-free/smooth, and pale. For those who bemoan the lack of funk in this version, perhaps a Tom of Finland “rough seXXX” flanker will be forthcoming.