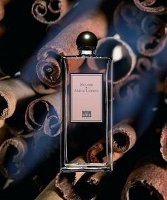 Rousse is the latest addition to the export line from Serge Lutens. It was created by perfumer Chris Sheldrake, and the notes are mandarin, cinnamon, cloves, spices, floral & aromatic notes, fruit, cinnamon wood, precious woods, amber, musk and vanilla.

Early reports that Rousse was based on cinnamon and inspired by Serge Lutens' memories of his grandmother "baking and making jam" (via osmoz) suggested that it might turn out to be a spicy gourmand, but it is no such thing, in fact, it is less foody than Cèdre (spiced apple cider) or the many from the line that start with heavy doses of stewed spiced fruits (Chypre Rouge, Santal Blanc).

To be sure, cinnamon is the star of the show here. The opening is lively and sweet, and reminiscent of cinnamon Red Hots (and if you like Red Hots, see also Comme des Garçons Harissa). The dry down is much drier and milder, and the cinnamon takes on first a dusty, later a creamy-powdery quality as it blends with dark woods, iris and whatever else is in there (the fruits and flowers are indistinct). There is a touch of amber and vanilla to keep it from being quite bone dry, and like yesterday's Mandarine Mandarin, it has a kind of murky-dusky, not-quite-dark-not-quite-bright quality.

I wouldn't call it a transparent scent, but it is considerably less embellished than the "standard" Serge Lutens style, if such a thing exists. I would call it spare, even restrained, and it will not, like some in the line, continue to morph on your skin over a period of hours. Many reviewers so far seem to find it dull, but I have liked it more and more on each wearing — I like spare and restrained — and it is easily my favorite of the recent Serge Lutens releases. It is entirely unisex, and while it is not heavy, the spicy warmth is probably more suited to fall/winter than spring/summer.

Rousse is available in 50 ml Eau de Parfum; for buying information, see the listing for Serge Lutens under Perfume Houses.