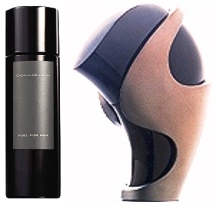 Auto racing and her husband (sculptor Stephan Weiss) were Donna Karan’s inspirations for her first men’s fragrance — DK Men (released in 1994). DK Men’s interesting bottle was designed by Weiss in the shape of a gear shift/throttle (image, right) and the DK Men TV commercial’s soundtrack was the noise of a revving engine. Karan wanted DK Men to convey “power” and said: "When I see my husband -- the guy with the toys, the cool dude, the hottest guy around -- it's always with his hand on the throttle; it's always power." (Women's Wear Daily, 7/15/94) Donna Karan Beauty Co. sold its fragrance license to Estée Lauder in 1997 and DK Men was discontinued; DK Men, rechristened Fuel for Men, has just been re-issued as part of the Donna Karan Collection of fragrances (image, left).

I don’t know why Donna Karan Cosmetics chose to use DK Men’s tagline, Fuel for Men, for the re-issue instead of the original product name; it’s a bit confusing since Diesel’s Fuel for Life fragrance hit the market recently, and ‘Fuel for Men’ sounds more like a nutritional supplement than a cologne…(why not ‘DK Men Fuel’)? The perfumers who created original DK Men and Fuel for Men are unnamed and the fragrances’ ingredients are mysterious too. Fuel for Men is blandly described on the Donna Karan Cosmetics webpage as being “A blend of spices, sensuous musks and exotic woods.” (For a company that’s proud of its fragrances and loyal perfume fans, Donna Karan Cosmetics produces some of the dullest written ad copy in the business.)

Fuel for Men opens with a strong (and energizing) gingery citrus accord (quite nice). Soon after application, the perfume begins to “soften,” becoming silky, almost talc-y. I wore Fuel for Men three days in a row while writing this review and each day the fragrance smelled slightly different on me, especially in mid-development; on day one, I smelled tobacco, the next day a faint fragrance note reminded me of the scent of dried gasoline on skin, and today I smell a leather-musk accord. Fuel for Men seems to fragment on my skin, and after application, it can smell different on my right arm than it does on my left arm: only the great opening notes and the base notes (sweet, powdery musk and sheer woods) smell the same on each day of wear — no matter where I spray.

I like Fuel for Men’s notes and phases, and the fragrance has good lasting power and perfect sillage (minimal). I’d love to know how Fuel for Men compares to 1994 DK Men; unfortunately, I never smelled DK Men. I hope Fuel for Men smells just like DK Men because, judging from perfume websites, there are lots of men out there who loved DK Men and missed it. (If you’re one of those men and have smelled Fuel for Men, please comment.) Though I like Fuel for Men, it’s not the “racy,” strange fragrance many DK Men reviews led me to expect; maybe the formula has been tweaked (almost a certainty) or perhaps what smelled “different” 14 years ago, now smells more mainstream. I’d categorize Fuel for Men as a pleasant and comforting perfume made with good-quality ingredients, and the consumer I visualize as I wear Fuel for Men does not exceed the speed limit, let alone own a racecar.

Update 12/08: A Now Smell This reader was kind enough to mail me a sample of the original DK Men fragrance; to my nose, it smells almost exactly like DK Fuel for Men (the age of the DK Men sample may account for its slightly "deeper" aroma).