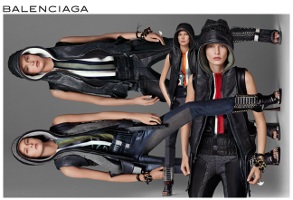 Fashion house established in Spain by Cristobal Balenciaga (1895 - 1972) in 1918; the flagship store in Paris opened in 1937. Balenciaga is often called the most important designer of the 20th century, and during his lifetime was known as the "couturier of couturiers". He closed his couture house and retired in 1968.

Designer Nicolas Ghesquière, who has been called "the most intriguing and original designer of his generation", has been the creative director since 1997.1 Update: Ghesquière and Balenciaga "parted ways" in late 2012; he was succeeded by Alexander Wang. In 2015, Wang was replaced by Demna Gvasalia.

The house of Balenciaga changed hands several times after Balenciaga's death. In 2001 it was acquired by the Gucci Group; since 2008 the fragrance license has been held by Coty.

See all articles on Now Smell This tagged Balenciaga.

1. Via Nicolas Ghesquiere, a Creative Young Spirit in the Master Class : Balenciaga:Reviving and Revering in the New York Times.