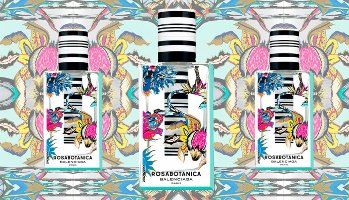 Florabotanica was a modern, clean, office-friendly floral, or as I put it when I reviewed it, "a modern, shampoo-ish blended-floral style several steps removed from the actual flowers". It was essentially loud (in the early stages, anyway) without any depth or richness. Rosabotanica is advertised as "unveil[ing] a fresher territory, with a sheer, enveloping second skin character", and yep, that's pretty much how it works out.

Rosabotanica, then, takes the sillage of the opening down a notch, but it also spices things up a bit. Here's the full description:

The fragrance opens with crystalline floral accents of hyacinth and creamy green notes of fig leaf, refreshed by the natural green character of petitgrain. The experimental rose offers bright vegetal notes while sparkling, slightly bitter drops of grapefruit and fresh spicy notes of pink pepper and cardamom enhance its personality. The white ambery dry-down is cleared by a structure of vibrant and luminous white woods, made of cedarwood, vetiver and patchouli with clean woody notes.1

The opening is lively and crisp. It smells to me mostly like grapefruit and cardamom, but lightly done (yes, you'll get the ubiquitous pink pepper too). There's a green-tinged floral note that is sort of like a second cousin to hyacinth (I was tempted to layer it with my L'Artisan Jacinthe de Bois, but since that one is now irreplaceable I didn't risk it); it's likewise light, but makes a pretty combination with the spicy citrus. By the time the top notes have dissipated, Rosabotanica is quiet, and feels much less floral than Florabotanica. While Florabotanica never struck me as a rose perfume in any conventional sense, Rosabotanica is even less so — the "experimental rose" is, really, experimental, and at most, you could call Rosabotanica "rose-y".2 There's a touch of fig, which I noticed more on some wearings than others — I wouldn't call Rosabotanica a fig fragrance either, but it adds some interest and just a smidgen of creaminess. The base is dry and pale and clean, with no earthiness whatsoever: the amber really is "white", and ditto on the vetiver and patchouli.

Rosabotanica is an Eau de Parfum, just like Florabotanica, but the far dry down is very faint— I had to nearly douse myself to write a review, and I have a feeling there will be complaints about the lasting power.

Verdict: I've already made it clear that Rosabotanica is light, yes? It's light, but that said, I found it to have more personality than Florabotanica, and to have less of a generic department store fragrance feel. If I needed something light and office-friendly, I'd certainly consider it, but I don't, so instead I considered how much better I would like it if they'd only amped up a few of the notes: the hyacinth, the fig, maybe a slightly warmer base? Still, nicely done and worth a shot. And I sure would love to own that bottle. 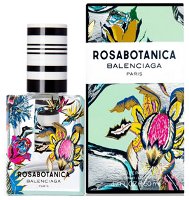 Balenciaga Rosabotanica is available in 30, 50 ($100) and 100 ($130) ml Eau de Parfum. It was developed by perfumers Olivier Polge and Jean-Christophe Herault.

2. As I've said before, 2013 was the year of the rose flanker, when it wasn't busy being yet another year of oud, but the rose flankers all de-emphasize the rose as much as possible. The rose in Rosabotanica, besides being "experimental", was also described as "a very plant-like rose", which is sort of silly if you deconstruct it, but which fits what they've done. I was reminded of going into The Body Shop to try White Musk Smoky Rose and being told by the salesperson not to worry, the rose wasn't that noticeable.