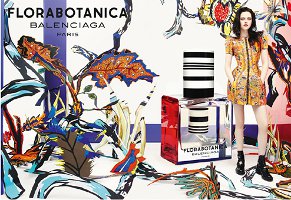 Florabotanica is the latest from Balenciaga, and I was fully prepared to adore it for any number of reasons, not least being the presentation: I love the offbeat advertising images and that's easily my favorite bottle of recent memory — and it's one of those rare bottles that is even more alluring in person than in pictures (the minute I picked it up, I started calculating how much I had just spent on jeans and yoga pants and how much I could still spend that day without threatening the food budget). They brought back perfumer Olivier Polge, who developed 2010's Balenciaga Paris, a fragrance that seemed an excellent start for the brand's revival as a perfume house under the auspices of Coty. Florabotanica is a great name for a perfume, and I even love the design of the outer box. Designer Nicolas Ghesquière's concept of a strange garden with beautiful flowers, but also dangerous flowers, sounded intriguing.1

The potential bad news was that it was geared younger than Balenciaga Paris; sorry, young 'uns, but that usually — not always! — means some degree of dumbing down or fruiting up. That Florabotanica is fronted by actress Kristen Stewart means nothing to me either way; as usual, I had to google just to remember who she was, and don't even ask me to comment on her recent "scandal", I don't know and I don't care, and will only say that the increased publicity would seem a boon for Balenciaga. I found the very untraditional manner in which she is used in the advertising to be refreshing.2

Stewart's characterization of the fragrance as light and clean, though, didn't seem to jive with Ghesquière's strange garden, and in the end, it's Stewart who is closer to the mark. The fragrance, developed by Polge with perfumer Jean-Christophe Hérault, is not so very strange or dangerous. The opening is sharp citrus tinged with green; it slowly turns minty and herbal, but that stage is short-lived. It's more floral as it settles (the notes: mint, rose, carnation, caladium leaf, vetiver and amber). The rose and carnation (with the heavier focus on the "rose") are done in a modern, shampoo-ish blended-floral style several steps removed from the actual flowers, and ought not to turn off young consumers wary of smelling like their mothers or grandmothers. Although the floral notes are strong in the early stages, Florabotanica dries down into a relatively sheer, slightly spicy floral musk, marginally powdery, mostly clean but not laundry-soap-clean, and reasonably office-friendly.

I did not love Florabotanica, in fact, I didn't have any strong feelings about it either way. It doesn't have as much personality as its packaging, but it's hardly the first in that line, and while it did not smell particularly youthful to me, yes, it does lack the understated elegance of the original Balenciaga Paris fragrance; I'm guessing it will not attract as many perfumistas. Florabotanica didn't annoy me as much as some similar recent "modern rose" fragrances, and it's probably better done than most. Still, I was not tempted to part with my money despite the charms of the packaging. I'm holding out hope for a livelier flanker, or that maybe Balenciaga will adopt that design as the house bottle? If they put Balenciaga Paris in that bottle, I think I'd be forced to reach for my wallet. 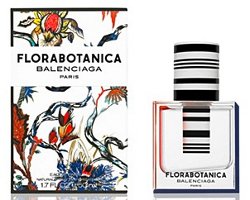 1. See the "behind the scenes" video.

2. By which I mean how she looks in the advertising; I don't think her brief comments in that same "behind the scenes" video did Balenciaga any favors. But her description of the photo shoot, from Women's Wear Daily (6/29/2012), is right on target:

“I think that’s kind of perfect for this particular ad. Usually, a fragrance ad would definitely be like,” said Stewart, striking an exaggerated, sexy lounge pose on the couch. “When I first stood there, I was like, ‘OK, do you want me to show the curves of the dress? Do you want me to stand like this? Like that?’ And they were like, ‘Just be comfortable.’ ”