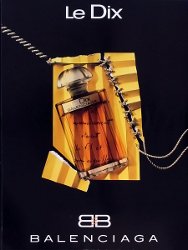 If Chanel No. 5 is Marilyn Monroe and Lanvin Arpège is Norma Shearer, then Balenciaga Le Dix is Gene Tierney: fresh, crisp, beautiful, and down-to-earth. Le Dix is the aldehydic floral that goes out to lunch on a weekday for lots of clever conversation but not an inappropriate amount of intrigue or cleavage.

Le Dix was created in 1947 and is named after the street address of Balenciaga’s fashion house in Paris. Le Dix came out the same year as Christian Dior Miss Dior, yet the fragrances are as different as the designers were. Ironically, it was the house that made the ultra-feminine clothing — Dior — that made the strangest perfume. Balenciaga, on the other hand, who was known for structured and unusual clothing, made the most traditional scent. (I read once that in the late 1940s and early 1950s to wear Dior you had to have a waist, but to wear Balenciaga you had to have a personality.)

Osmoz lists Le Dix’s top notes as bergamot, lemon, peach, and coriander; its heart as rose, lily of the valley, lilac, and orris; and its base as vetiver, sandalwood, tonka, and peru balsam. I don’t see violet listed in the notes, but if I had to list first two notes I identify in Le Dix I’d say “aldehydes” and “violets”. Le Dix’s drydown is gorgeously creamy and woody and reminds me of Chanel Bois des Iles. The overall feel of the fragrance is a lot like the new Piguet Baghari.

I’ve had a bottle of Le Dix Eau de Toilette for a few years. I wear it mostly in the spring and summer and mostly with a blouse or dress that I’ve had to iron. There’s something in Le Dix and in the crispness of ironed cotton that goes together. At about the time that my dress is creased and lipstick smudged, Le Dix relaxes, too, into its wonderful sandalwood and tonka base. The Eau de Toilette has moderate lasting power and won’t irritate the person in the next cubicle.

Balenciaga Le Dix is hard to find in stores but easy to find and inexpensive online. A quick search found several sites offering a 100 ml bottle of Eau de Toilette for less than $30.