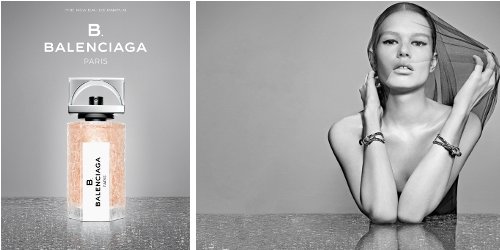 Since we last heard from Balenciaga, fragrance-wise, Nicolas Ghesquière has left the brand.1 Alexander Wang reportedly started working on the new B Balenciaga as soon as he became the house designer in late 2012 (Rosabotanica came out in the interim, but was apparently outside of Mr. Wang's purview). Wang said he wanted his fragrance to be timeless, and he picked lily of the valley because it wasn't overpowering, and an edamame accord because he likes green notes.2

The opening is bright and citrusy, and it is green, but it's a very soft, dewy and pale sort of green (it reminded me a bit of the Martin Margiela Untitled scent) with plenty of violet leaf (which reminds me of too many fragrances to list). On paper, the green opening lasts for ages, and the violet leaf predominates, but on skin, that and the florals — a brief whoosh of something that could be lily of the valley, I suppose, although it could just as easily be another vaguely peony-ish spring flower blend — fade rather quickly into a mild amber-y musky woods, lightly smoothed over with some powdery iris. It's a bit warm and mostly quiet; I would call it seasonless and unisex.

Verdict: Nicely done if not particularly exciting or unusual, and anyone hoping for a burst of weirdness from the edamame accord is bound to be disappointed (Ari at Scents of Self: "Let’s get this out of the way: B. sounds more interesting than it smells.")3 It's more sophisticated than Florabotanica, and it would make a decent no-brainer fragrance for those days when you need something pretty and wearable but unchallenging. Even for quiet elegance, though, I don't like it nearly as much as Balenciaga Paris, the first Nicolas Ghesquière scent.

The packaging looks nice enough but Ari says the bottle is sillier in person; do comment if you've seen it. 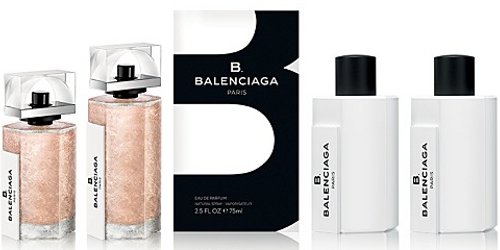 B Balenciaga is available in 50 ($110) and 75 ($145) ml Eau de Parfum and in a 10 ml Rollerball ($25),  plus matching body products. It was developed by perfumer Domitille Bertier. The notes include lily of the valley, violet, green leaves accord, edamame accord, iris, cedar, ambrette seeds and cashmeran wood.

1. For anyone who missed the resulting kerfluffle, whereby Mr. Ghesquière made some comments to the press about Balenciaga "becoming a bureaucracy... until it was no longer even linked to fashion" and Balenciaga sued him for 7 million euros, that case has now moved to private mediation.

2. See A Moment with Alexander Wang in Paris: The Story Behind His First Perfume for Balenciaga at Vogue.

3. If you want a burst of weird + green, do try Dawn Spencer Hurwitz Wasabi Shiso! And of course do add your own recommendations in the comments.