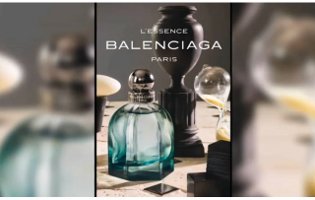 Well, it’s supposed to be stronger but it’s not actually that strong—it just has a different language. It’s all the same elements but we are saying something different than we were with Balenciaga Paris, which was so much about the violets. This one has a metallic side, it’s about the violet leaves so it’s slightly more masculine and androgynous, too.1

That's Balenciaga designer Nicolas Ghesquière talking about the new Balenciaga Paris L’Essence, the follow-up fragrance to last year's Balenciaga Paris. And he's telling the truth — so much so that I hardly need to write a review, and will prattle on only for the sake of anyone who really needed a little break this afternoon. So, those of you hoping for a more intense version of Balenciaga Paris' muted violet elegance — perhaps with some sillage? — will be disappointed by L'Essence, although if what you're after is a real wallop instead of a whisper, you can always turn to Tom Ford's Violet Blonde.

L'Essence maintains the original's sheer, close-to-the-skin feel, but intensifies the green notes in the early stages and the dry woody base notes later on. The floral aspect is nearly gone, and the powdery finish is even lighter than it already was. It does not really read as metallic to my nose (actually, it seems less metallic to me than the original), but there is an almost leathery feel (again, as advertised) to the dry down. On paper, it struck me as lighter than Balenciaga Paris, on skin, as ever so slightly more intense, considerably more chypre-ish and considerably more masculine — a man could have worn Balenciaga Paris anyway, but a woman wearing L'Essence might be assumed to have borrowed from the other counter.

In and of itself, of course, this is nothing new: women have been borrowing men's fragrances forever, and brands have been emphasizing the masculine side of their feminine releases off and on nearly as long as I've been blogging. The idea, expressed in the ad copy, that L'Essence "play[s] with the rules of perfumery and shake[s] up notions of male and female" doesn't seem as daring today as it might have 10 years ago, insofar as there aren't really any rules left to play with.2 That's neither here nor there, perhaps, but to my mind, L'Essence, while perfectly wearable to anyone who doesn't have conventional gender requirements, isn't quite as interesting as Balenciaga Paris. Either one of them is more interesting than your average mainstream release, though, and I wait with interest to see what Balenciaga will do next.

Balenciaga Paris L’Essence is available in 30 (£44), 50 ($95) and 75 ($130) ml Eau de Parfum. It was developed by perfumer Olivier Polge (who also did the original Balenciaga Paris) and features notes of violet leaves, vetiver and patchouli.

1. Via Nicolas The Nose: Ghesquière Talks Fragrance, Fashion at Style.

2. As an aside, I was thinking the other day about what would be daring in perfume at this point, when nearly everything has been done and done over twenty times, and all I could think of that would shock me at a department store perfume counter was some real old-fashioned skank. L'Essence, like virtually every mainstream perfume these days, smells like they scrubbed and polished all the dirty parts, and then scrubbed and polished them again. It's earthy, but it's that clean kind of earthy gifted to us by modern chemistry.