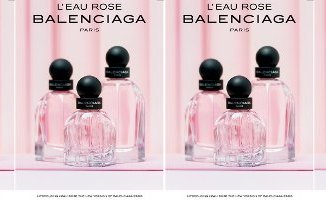 No matter, L'Eau Rose is a decent enough flanker, and we all know they're rare enough. And the description is accurate enough:

A sparkling violet fragrance. A twist of the iconic violet with a sparkling touch of blackberry and musk. The scintillating and youthful fragrance is a feminine scent that captures the sophistication of Balenciaga Paris with an enticing, floral musk.

Plain speak translation: a sort of mash-up between a blackberry musk and a traditional powdery rose-violet. The top notes are sparkling, fruity and sweet but not too fruity and sweet, with lots of peppery citrus. I found it quite fun — it makes a great first impression on paper and on skin. The dry down recalls the original Balenciaga Paris fragrance: muted dry woods, even more muted (and clean) patchouli, a bit of musk, all smoothed over with a light dusting of powder. It's a bit more transparent than Balenciaga Paris, and a bit less earthy, and a lot less creamy. Arguably, it's also a bit more youthful and a bit less distinctive.

Verdict: L'Eau Rose is wearable and likable, and I wore it quite happily — if a bottle came into my possession, it would get some wear. It's not unusual or fabulous enough to make the buy list, though, and I do wish it had more oomph in the dry down. But for a flanker — a pink flanker, no less — it exceeded my expectations. And to my nose, it's a huge improvement over the ho-hum concoction they came up with for Florabotanica — if this juice was in the Florabotanica bottle, I'd own it already.3 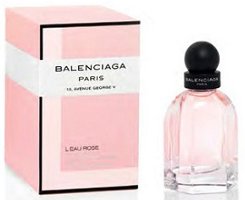 Balenciaga Paris L'Eau Rose was developed by perfumers Olivier Polge and Domitille Bertier; notes include blackberry, violet, rose, patchouli, cedar, musk and cypress. It is available in in 50 ($90) and 75 ($115) ml Eau de Toilette. It doesn't officially launch until March, but it can be found now at Nordstrom.

1. Wang's appointment has been confirmed by the brand's owner, luxury group PPR (they also own Gucci, Saint Laurent and Bottega Veneta), and his first collection will reportedly show at Paris Fashion Week. Or maybe it already did — ya'll know that I have no idea when Paris Fashion Week might be. Before all this, Wang had been rumored to be working with Puig on a scent under his own name.

2. Or maybe there is still all sorts of hoopla to come when L'Eau Rose officially launches in March; nobody tells me anything.

3. I do like the packaging for L'Eau Rose, even if it's not as tempting as that for Florabotanica. The cream and rose outer box is lovely, and the matte black cap (which not everybody appreciates, if the comments here are any indication) keeps it from looking too girly and pinkified. Both look more elegant in person than in pictures.