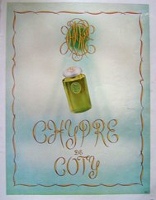 François Spoturno, originally from Corsica, studied perfumery with Antoine Chiris in Grasse for one year, maybe two (depending on which source you consult) before moving to Paris, adopting a variation on his mother's name (Coti), and launching his perfume business with La Rose Jacqueminot in 1904.

Coty was one of the first to understand the importance of fragrance packaging, and more specifically a beautiful bottle — "A perfume is seen as much as smelled", he said — mass produced and sold at a reasonable price.1 His business expanded, eventually encompassing cosmetics and powders as well as perfumes, until he was one of the wealthiest men in France.

In addition to revolutionizing the packaging and marketing of perfume, Coty was also a respected perfumer. Among his many creations: L'Origan (1905), Chypre (arguably his most famous scent, among modern perfume freaks, at any rate, 1917), Emeraude (1921), Paris (1922), L'Aimant (1927).

The history of the modern company, Coty, Inc, is too complicated to relate in detail here, but what is now known as Coty, Inc is descended from the US arm of the original Coty company, after various mergers and acquisitions (among other things, Pfizer sold Coty to the German company Joh. A. Benckiser GmbH in 1992). It is currently one of the largest fragrance and cosmetics companies in the world. In 2008, Coty had sales of $4 billion.2

Although the Coty brand continued to launch new fragrances long after the death of François Coty (see reviews of Muguet des Bois, 1941; Vanilla Musk,1972; Vanilla Fields,1993), today relatively few fragrances are produced under the Coty brand name itself; most of Coty's business derives from other brands in the Coty portfolio.

See all articles on Now Smell This tagged Coty.

You can read a 1930 New Yorker profile on François Coty here.

1. Quote via Elisabeth Barille's The Book of Perfume, p. 80.