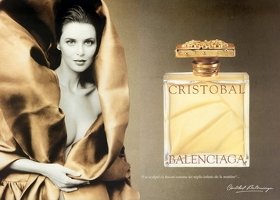 Although Balenciaga Prelude and Cristobal are clearly different fragrances, they are similar in many ways. In another Balenciaga review, I compared Rumba and Talisman to sisters. If you’ll allow me to flog that analogy one more time, let me present the Balenciaga brothers: Prelude, the eldest; and Cristobal, mommy’s little boy.

Prelude follows the tradition of two of Balenciaga’s other scents — Quadrille and Rumba — in being named after a form of music. But Prelude is more Beethoven than Chopin and more cello than piano. Prelude opens with a hint of brightness from aldehydes and bergamot, then quickly settles into a spicy, almost gummy stage, like a stick of cinnamon chewing gum might taste if it were made by Fortnum & Mason and stored in an amber case. Just enough carnation and jasmine surround the cinnamon to soften the edges. Prelude is deep and nostalgic smelling, but for all its depth it doesn’t last more than a few hours. Prelude was released in 1982, with top notes of aldehydes, bergamot, orange, and pimento; a heart of carnation, jasmine, rose, ylang-ylang, orchid, and cinnamon; and a base of amber, vanilla, patchouli, civet, benzoin, tolu, and olibanum.

Cristobal, named after Cristobal Balenciaga, is much sweeter and more gourmand than Prelude. To me Cristobal smells like a fig crème brûlée might taste if it were made with honey steeped with a pinch of tarragon and a teaspoon of pineapple juice. I’ve read reviews swearing that sandalwood tempers Cristobal's sweetness, but after the first brief herbal notes dissipate, Cristobal grows bigger, creamier, and more vanilla sweet on my skin. And this baby doesn’t die easily — a few drops before your morning coffee will linger to spur a hankering for Haagen Dazs after dinner. Perfumer Olivier Gillotin, who also created 10 Corso Como, made Cristobal in 1998. Cristobal has top notes of green fig, bergamot, marigold, and pineapple; a heart of jasmine, blue freesia, rose, and orris; and a base of sandalwood, vanilla, patchouli, and amber.

The family resemblance between Prelude and Cristobal lies in their shared warmth and almost edible quality. Of the two, Prelude is more serious and less social. He has a hot cup of spicy tea and a macaroon at his elbow as he sits in his boiserie-lined library reading a new translation of Petrarch's sonnets to Laura. Meanwhile, Cristobal is in the kitchen with his hand in the cookie jar. When you catch him, he breaks into a cherubic smile and lies, "But you told me I could have one." At dinner, Cristobal's wild stories hold the table, while Prelude talks quietly to the woman at his side. And after dinner? Prelude returns to the library to listen to old jazz records while Cristobal charms the ladies with his sweet and entertaining, but ultimately forgettable, prattle.

That wraps up the Balenciaga siblings. Sure, I could write about Aunties Le Dix and Michelle, but I’ve tested your patience long enough.