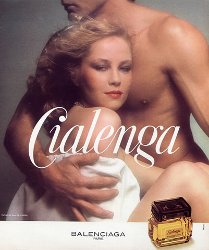 Beginning in the mid-1960s and hurtling through the next decade, green chypres were all the rage. Every perfume house seemed to have one, starting with Yves Saint Laurent Y (1964), then on to Paco Rabanne Calandre (1969), Chanel No. 19 (1971), Estée Lauder Private Collection (1973),Revlon Charlie (1973), Christian Dior Dior-Dior (1976) and Rochas Mystère (1978). I'm sure I'm forgetting some. Balenciaga’s contribution was the short-lived Cialenga.

The 1970s green chypres ranged from herbal to floral and fruity to dry, with some a touch powdery and yet others soapy. Although Cialenga's notes list neither orange blossom nor musk — notes I associate with soap — the fragrance veers dry and soapy. Its overall feeling is crisp and clean (as much as a mossy fragrance can be clean, that is). (Note: my review is from a 1970s bottle of Eau de Toilette, and although it seems to be in decent shape, I’ve no doubt that it has changed while it’s been in the bottle.)

Cialenga opens with a tart aldehydic burst of cool, green bergamot and maybe neroli. When the tingle subsides, soap steps right up. For about ten minutes, the fragrance is all green lather on me, but at last the soap subsides, and a floral heart emerges, still green, but tinged with lily and a little of rose and iris's fruit. Cialenga’s notes include clove, and I do smell a touch of spiciness, but without reading the notes I would have attributed it to carnation.

At last Cialenga totally relaxes into its dry, mossy wood. Now, with its deliciously fusty oakmoss, it begins to smell like a chypre, although it still wears a veil of green and soap, like a freshly showered woman who has stubbed out her cigarette near a vase of flower stems. Cialenga has gentle sillage, and it lasts about five quiet hours on my skin.

Why were green chypres so popular when they were? I’ve heard people connect green chypres with women’s growing independence, but I don’t get it. To me, green chypres can be austere and elegant, even prissy — or intellectual. I know that Charlie’s advertising featured a model in pants who appeared to want to please only herself. But that doesn’t convince me that a green chypre smells of liberation any more than the advertising of a hundred fragrances featuring half-dressed women leads me to believe the perfumes smell of sex.

My guess is that, in their day, green chypres smelled modern. Sleek, even. Today, many are throwback scents to some people, and classics to others (including me), but when they were released they must have felt thrillingly spare. For the elegant set, wearing a green chypre might have been akin to tossing out the girdle and slipping on a Courrèges. What do you think?

Cialenga is lovely, and it’s discontinued. Thanks to other terrific green chypres still in production, I don’t mourn its demise, but it’s worth smelling if you get the chance.