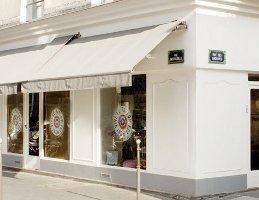 Archives 69 takes its name from the address of the Etat Libre d'Orange flagship boutique, located at 69 Rue des Archives in Paris. Since this is Etat Libre d'Orange, you may be guessing that the name has a double meaning, a specifically sexual one, and you are correct; an entry on the Etat Libre d'Orange blog, complete with alternate label art for Archives 69, makes that point clear. Its text explains, "This is a perfume designed to free the senses, to open the heart to all the possibilities. It is an invitation to pleasure, an ode to seduction. It comes without restrictions, rules or regulations. It is yours to do with as you wish. This is the scent of sensual liberation."

The composition of Archives 69, developed by perfumer Christine Nagel, includes notes of  tangerine, pink berries CO2, pepper leaf, orchid & prune JE, incense, camphor, benzoin, patchouli, and musk. Its concept was partially inspired by the short story "Drencula" by French writer Boris Vian, a tale of a young man's encounter with a hermaphroditic vampire, from Vian's collection Écrits Pornographiques. Archives 69 was given the tagline "The Illusion of Sex" in preview materials, and its press release (subtitled "The End of Innocence") includes a lengthy meditation on a nameless female character who embodies many dualities: the sacred and the profane, heaven and hell, pleasure and pain, etc. So, how do this theme and this prose translate into scent?

Archives 69 does pair some opposing notes. For example, it tickles the nose with a hint of pepper in its opening and a distinct metallic edge that runs along the entire composition, but its sharpness is balanced by the smoothness of its woody-incense elements. There's a secretive honeyed-cream note buried in the fragrance's heart, almost like a white flower petal; is this the orchid, or something similar to lily, paired with the benzoin? The fragrance dries down mostly into a warm, hazy musk, neither animalic nor soapy-clean, and still slightly sweet. It's sophisticated, but comfortable. I might be catching certain ingredients and effects that remind me of Nagel's other work (the peppery note of Si Lolita, the mineral-musky part of Narciso Rodriguez for Her), but then again, I might be over-thinking that angle. If Archives 69 were a material or a texture, it would feel (to me) like camel-colored suede coated with a finely shredded veneer of aluminum leaf.

Kevin recently observed, in his review of Sécrétions Magnifiques, that Etat Libre d'Oranges's fragrances are less shocking than their names, descriptions, and artwork would have us believe. For me, this depends on the fragrance in question. Etat Libre's original line-up included scents based on unlikely juxtapositions of jasmine and cigarette smoke, incense and bubble gum, violet-scented face powder and dirty leather; I found many of them unconventional and even unsettling. On the other hand, the Etat Libre fragrances that I personally wear are smart and unusual but not exactly provocative (Noël au Balcon, Vraie Blonde and, most of all, Like This). 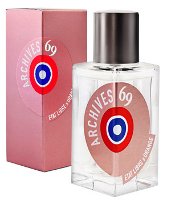 Archives 69 fits the latter category. It's androgynous, it's almost tactile, and it treads an intriguing line between natural and synthetic effects, but it doesn't feel transgressive. It would be wearable in many workplace situations, since it's not at all overpowering, either. I can't help thinking that Archives 69 would be a best-seller for Calvin Klein or Gucci or some other line that markets fragrance as high-end sex. (Too bad their own products are often so dull; Etat Libre did a much better job with the concept, even if the result isn't as wild as promised.) If you're really in the mood for something a little dirty and raunchy, you should probably stick with Kiehl's Original Musk Blend No. 1, Serge Lutens Muscs Koublaï Khan, or yes, Sécrétions Magnifiques. But if you think you might like a sophisticated and contemporary skin scent with just a hint of something edible (the vanillic benzoin note, that is!), then Archives 69 should be on your "to try" list.