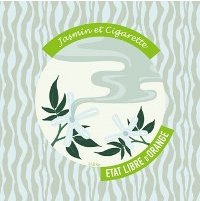 Etat Libre d'Orange, as a brand, doesn't really suit me, which is a shame because it's one of the few niche lines that still sells a bottle for less than $100 (and as many of you will remember, $100 is the new free). I haven't tried quite all of them — they've made a whopping 22 fragrances since they debuted in 2006 — but by now I've tried most of them. The one that impressed me the most (although it isn't really "me") was the brilliant Like This for Tilda Swinton; after that, I'd list Putain des Palaces and Vierges et Toreros as close calls, and I'd probably want a bottle of Fat Electrician if I didn't already own a bazillionty-and-one vetiver fragrances, modern or otherwise.

But so far, I've never been tempted to buy, and only one Etat Libre scent has been sitting in my purgatory basket1 and that's Jasmin et Cigarette. Since Kevin reviewed Sécrétions Magnifiques yesterday and Jessica is going to review Archives 69 tomorrow, it seemed like a good time to pull it out and decide one way or another.

Jasmin et Cigarette was done by perfumer Antoine Maisondieu, who has developed quite a few fragrances for the brand (I'm far too lazy to count, sorry) and it's meant, I take it, to be femme fatale sort of fragrance — Greta Garbo and Marlene Dietrich are listed in the ad copy, as is "the twilight zone, the banned, addiction". Appropriately enough, the jasmine comes out swinging in the opening, strong and indolic, but that doesn't last long. Then it's fresh and green and sparkling, with sweet fruity undertones. The mood is perhaps more cheerful and summery than mysterious and sexy, and it perhaps doesn't smell like they used the bestest of best jasmines, but it's all quite nice.

The cigarette part is maybe where you're supposed to find the mysterious and sexy? And yes, I'm one of those ex-smokers that misses (sometimes, anyway) the smell of a freshly lit cigarette. In Jasmin et Cigarette what I smell, mostly, is tobacco leaf — a smell that (oddly?) reminds me more of perfume than smoking. There's also some hay, and a bit of sweetness, and a bit of pale wood. There is only the tiniest whiff of anything like smoke, and the reviewers who mention overflowing ashtrays must have way more sensitive noses than I do. Then just as I think the tobacco + smoke is going to gather steam and make a real showing, the whole thing starts to settle; it doesn't really fade away entirely, but it gets quiet and the jasmine starts to smell thin.

Jasmin et Cigarette is another close call. It's a great idea; I had no idea I wanted a jasmine + cigarette fragrance, but now I know. This one is just a bit too tame and office-friendly, and in the end I agree with the reviewer at Luckyscent who noted that if "this were a woman, she'd be dressed in preppy j crew with sexy lingerie underneath". Yes, exactly, not Greta Garbo or Marlene Dietrich but Cameron Diaz, maybe, or Reese Witherspoon. Close, but no cigar.

1. My purgatory basket is where fragrances go when I can't make up my mind about them.