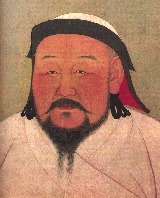 Grandson of Genghis Khan, reformer, warrior, Great Khan of the Mongol Empire, Yüan Dynasty emperor — Koublaï Khan was a powerhouse and his name evokes long-ago-and-far-away exoticism. But when I look at Koublaï Khan’s portrait (from the National Palace Museum in Taipei) I see an approachable man, someone who loves to eat, a man who seems amused and ready to giggle, someone I can imagine gossiping with over a cup of milk tea (or something stronger).

What did I expect from Serge Lutens’ Muscs Koublaï Khan? I imagined a scent that was a bit strange, a rough-and-tough perfume with a strong “personality”, a perfume of Mongolian sturdiness coupled with Chinese finesse; I expected something contradictory and complex (like Koublaï Khan himself, who was an admirer of Buddhism but who spent much of his life invading and conquering lands and peoples).

Les Salons du Palais Royal Shiseido does not reveal the ingredients for Muscs Koublaï Khan online, but I found a company description of the perfume from 2000 (the perfume was released in 1998) that lists: civet, castoreum, costus roots, cumin, labdanum, Moroccan rose, ambergris, ambrette seeds, beeswax, vanilla and patchouli.

Before wearing it, I read reviews of Muscs Koublaï Khan online; it was described by many as being “vile” “fecal” “disgusting” — the scent of an animal or an unwashed man, make that an unwashed man on horseback, a sweaty horseback. These descriptions did not alarm me because I have a “history” with troublesome perfumes (some people are attracted to “bad boys” and “bad girls” — I’m attracted to “difficult” perfumes). I thought another perfume deemed “unwearable” by many perfume lovers might find a place in my heart and perfume cabinet.

At first, Muscs Koublaï Khan smells like the lovechild of Eau d’Hermès and Le Labo Rose 31: there’s cumin, there’s rose, there’s musk (civet). The cumin and musk are stronger in Muscs Koublaï Khan than in its “parents” and its rose note is a bit fruity compared to Rose 31’s winey rose.

Muscs Koublaï Khan starts off bright and clear and it warms the skin, but the scent begins to soften, to cloud, almost immediately (as if turning from hot, incendiary liquid into silky powder). During the early stages of Muscs Koublaï Khan, a leather/suede note peeks out briefly from the dust storm of cumin and the pool of musk. Cumin doesn’t surrender to the onslaught of musk; cumin is noticeable from start to finish, and the musk gets muskier the longer you wear Muscs Koublaï Khan. Muscs Koublaï Khan possesses the characteristic Lutens’ sweetness (soft patchouli, vanilla, labdanum) and in the extreme dry down, Muscs Koublaï Khan’s musks, cumin and rose are joined by a “ripe peach” scent and the aroma of brewed black tea.

I would be lying to you if I said there wasn't a “dirty” accord in Muscs Koublaï Khan; apart from cumin and musk, perhaps the scent of costus roots (Saussurea costus) plays a part — their scent often recalls the smell of “fur”, goats, or the aroma of unfresh human hair and scalp. My skin seems to bring out the musky aspects of Muscs Koublaï Khan, but when I put the perfume on a friend, it smelled “tamer” — lighter, more powdery, rosy-fruity.

The lasting power of Muscs Koublaï Khan is astounding. The perfume lasted through a day and even after a hot shower. Muscs Koublaï Khan would make an excellent soap; I imagine a large, opulent, cinnabar-colored bar, embossed with Mongol-Chinese motifs.

Will Muscs Koublaï Khan be joining my other “bad boys” of perfume? I appreciate Muscs Koublaï Khan as I appreciate characters who are independent and fearless, who don’t give a damn what others think of them, their ideas, their hairstyle, their clothes or — their smell. I don’t believe I’ve evolved to that level of personal freedom … yet.

Muscs Koublaï Khan is in Serge Lutens’ Les Somptueux (Sumptuous) line of fragrances that also includes Ambre Sultan, Cuir Mauresque, and Vetiver Oriental. It is in the exclusive range; for buying information, see the listing for Serge Lutens under Perfume Houses.

Note: image is of Portrait of Kublai Khan from the National Palace Museum, Taipei, via mongolianculture.