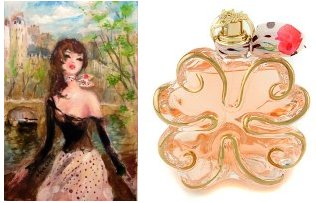 I've always had a weakness for Lolita Lempicka. I wore the original Lolita Lempicka fragrance, now known as Lolita Lempicka Le Premier Parfum, during a particularly optimistic period of my life (when I moved to a different city, started a new job, and met the man who is now my husband), so it will always hold happy memories for me. I purchased L de Lolita Lempicka "unsniffed," just because I loved the bottle design, and I've enjoyed some of the flankers for both fragrances.

The fragrance itself is classified as a spicy floral, and while it still fits the company's image, it's nowhere near as edible-seeming as the original Lolita Lempicka or as dense as L de Lolita Lempicka. It opens on a distinctly peppery note that feels like a more girlish derivation of L'Artisan Parfumeur Poivre Piquant. The peppery edge never quite disappears, but the overall scent shifts into a softer, warmer mood. Its heart is a spiced, ambery orange — there seems to be a hint of ginger — that manages to avoid Christmas-pomander territory. The patchouli and tonka balance each other out so that the base is smoooth rather than earthy (not that you really expected to find an oily-dirty patchouli in the Lolita line), and the hints of powdery heliotrope or sweet pea are very subtle. I'd classify Si Lolita as a sheer floriental, but it's both cozier and more piquant than other "youthful" florientals such as Coco Mademoiselle or Gucci Guilty. It reminded my friend C. of Fendi Theorema, and now I'm noticing that Theorema was also created by Christine Nagel, which is an interesting coincidence.

I have to admit that I don't spritz my other two Lolita Lempicka fragrances very often these days; they're both a little too intensely gourmand for everyday use in my current schedule. This new fragrance is still "so Lolita," since it's a little bit romantic and a little bit playful. It may be somewhat less distinctive than the original Lolita Lempicka or L, but it's also versatile enough for a thirty-something woman who works in an office to enjoy year-round, and these days, I need that sort of fragrance in my collection, too.