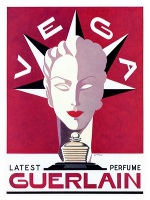 A statuesque blonde draped in bias-cut, ivory silk charmeuse is a classic image of glamour. She drinks champagne, has breakfast in bed on a tray, takes bubble baths, and breaks hearts. A puff of maribou trims the toe of each of her slippers. Now that this image is firmly in mind, let's tweak it. Give our blonde a few years in a Swiss finishing school, a lusty appetite for lobster at midnight, and a laugh a little too loud for her patrician mother, and you have Guerlain Vega. Substitute wine coolers for the champagne, a facility for Pig Latin rather than French, and an addiction to patent leather heels from Payless, and you have Etat Libre d'Orange Vraie Blonde. They're sisters from opposite sides of the tracks.

Jacques Guerlain created Vega, a blowsy floral aldehyde, in 1936. Guerlain re-released it in 2005 as part of its "Il Etait Une Fois" series. The Guerlain website lists its notes as aldehydes, cassia tree, bergamot, jasmine, ylang ylang, sandalwood, iris, amber, and vanilla. I also smell lavender and a pinch of coriander. Vega is what I imagine Marilyn Monroe sleeping in rather than Chanel No. 5. Although they're from the same genre of perfume, I find Vega more exuberant and emotional than No. 5.

Vega Eau de Toilette balances elegant, nose-tingling airiness with the weight of spice, creamy flowers, and sweet wood. After the first sneezy breath, the slightly sour herbal hit from tarragon, lavender, and coriander surprises me with its reminder of a masculine fougère. But the lush load of flowers, heavy on the ylang ylang, signals Vega is all woman. The ylang ylang persists into its sweet, woody dry down when Vega's spiciness has faded almost away. Vega is distinctive without being demanding. Although Vega may not play by the rules of many aldehydic florals, she will still make it into the country club. 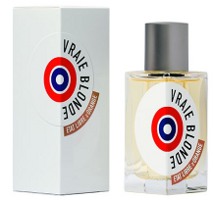 In Vraie Blonde we get a traditional aldehydic floral's perfume-y opening, but mixed with unexpected fruit, herbal notes, and pepper, rounded out with smooth flowers. Like Vega, it applies airiness to a creamy floral body tinged with an intriguing hint of tangy-sour. But Vraie Blonde opens sweeter and fruitier than Vega and sits more heavily on the skin. Instead of Vega's champagne, I get cocoa-tinged ginger ale. Its dusting of pepper also sets it apart from Vega, making it feel more modern. An hour after applying it, Vraie Blonde's fruitiness is gone, and what's left is a warm, peppery wood with a little of the tang lingering. Vega may be a surprising composition, but Vraie Blonde is almost baffling. Somehow it all works, and while I wouldn't go so far as to call it elegant, it's as glamorous as all get out.

Both Vega and Vraie Blonde have moderate sillage and last five or six hours on my skin. I adore Vega, and if $300 ever fell into my lap, I'd buy a bottle in a second. In the meantime, I'll settle for the more reasonably priced Vraie Blonde. It just might suit me better anyway.

Guerlain Vega is $305 for 125 ml Eau de Toilette; for buying information, see the listing for Guerlain under Perfume Houses.