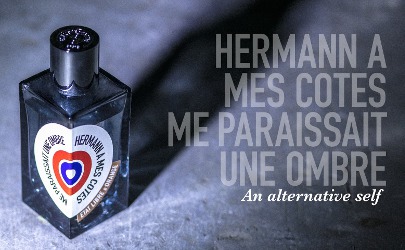 To be precise, this Etat Libre d’Orange fragrance isn’t just called Hermann. It’s Hermann à mes côtés me paraissait une ombre, a line from a poem by Victor Hugo. Translated, that means “by my side, Hermann seemed to me like a shadow.” Here, we’ll stick simply to Hermann.1

Hermann kicks off as tart and green and piney as I imagine the forest to be through which Victor Hugo’s protagonist rode. Imagine the new, pale green tips of a fir’s branches, almost citrusy, and you get the idea. This green veil loosens to reveal rose sweetened by amber. Most people won’t think of Hermann a rose perfume, though. The rose is more like the peg that anchors the rest of the fragrance. Underlying this is a large helping of sheer incense.

Hermann isn’t as viscous as my description makes it sound. Lots of incense-inflected fragrances have a textural depth that is almost three-dimensional. You feel like you can touch them. Think of Tauer Perfumes L’Air du désert marocain, for example. You can almost take a bite out of that one and chew.

By contrast, Hermann is cold and sheer, like an Eau de Cologne. Its forest-like feel hints at the freshness of lavender, and — at least in its opening hour — its tartness makes it bracing. The rose and amber at its center soften its edges a bit, but this is no cream puff of a perfume.

Where Hermann is not like Eau de Cologne is in its skin-stickiness. I put a dab of Hermann — seriously, at most a milliliter — on both wrists yesterday before breakfast. I wore it to work, where I washed a week’s worth of coffee cups; put on land lotion; walked home in the pouring rain, no gloves; and took a bath. When I went to bed, I still smelled tangy incense on my wrists.

Although Hermann has a lot of presence, I can imagine men who don’t generally go in for fragrance liking it. They might see it as “clean” and “not perfumey,” although I think it has more interest than that. Besides being a gateway scent, it would also make a good everyday, put-it-on-and-forget-it scent for someone who likes green, traditionally masculine fragrances. 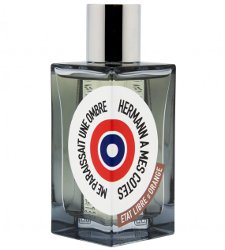 1. Which would be a really cute name for a dachshund. Someday we should do a post on pets named after perfume.