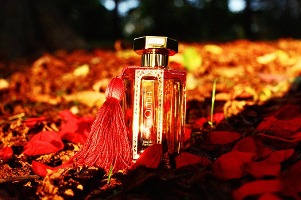 2009 turns out to be the year of oudh, at least in the niche perfume sector. Let's see, there was Pure Oudh from By Kilian, and Midnight Oud from Juliette Has A Gun. Czech & Speake relaunched Dark Rose. Le Labo contributed Oud 27, and Bond no. 9 did an oudh for Harrods and then another as their first signature scent, Bond no. 9 Perfume. Indie line Soivohle did Oudh Lacquer, and Micallef did Aoud Gourmet, and Amouage did the Epic duo. Comptoir Sud Pacifique did a quartet (Aoud de Nuit, Aouda, Nomaoud & Oud Intense), but got beat out by the 8 (!) fragrances in the Boadicea the Victorious Oud Collection. For all I know, Montale beat them all — it's so hard to keep track of new fragrances from Montale that I've mostly given up trying.

Al Oudh, L'Artisan Parfumeur's latest entry from their travels series, thus joins an already overcrowded room. That, plus the fact that perfumer Bertrand Duchaufour is working with a traditional oudh palette of Middle Eastern spices and rose (the notes: cumin, cardamom, pink pepper, neroli, rose, castoreum, civet, leather, musk, oud, sandalwood, Atlas cedar, patchouli, myrrh, incense, vanilla and tonka bean), might make you suspect in advance what turns out to be true: Al Oudh is not the most original or unusual oudh fragrance of the year.

Still, Al Oudh is a bold, very enjoyable outing. The opening is a highly spiced citrus, only slightly medicinal — you'll find nothing here like the heady, swirling bandaid-fest that opens your typical Montale oudh. That's followed by a mellow, rather soft rose laid over a lively and rather skanky blend of oud and animalic notes, lightly sweetened with vanillic notes and with faint undertones of stewed dried fruits à la Amouage Jubilation XXV (or L'Artisan's more recent Havana Vanille).

Al Oudh is on the darker side of Bertrand Duchaufour's list — think L'Artisan Aedes de Venustas or Méchant Loup rather than Dzongkha or Fleur de Liane. Still, it doesn't feel dense or heavy or overly dark, and it's perfectly unisex to my nose. Whether or not you'll like it might depend on how you feel about clean vs. dirty in perfume — in other words, just how much skank can you take? I generally think of myself as middle of the road on this issue. I like a touch of animal, but too much is, well, too much, and I'm usually something of a cumin-phobe. Despite that, I found Al Oudh quite enjoyable to wear: I'm not sure I'd douse myself in it on the way to the grocery store, but I didn't find it hard going in the least, and it has a refined, almost elegant feel despite the allusions to the barnyard. But opinions diverge wildly — over at Basenotes, I saw several complaints that it was too tame, meanwhile, Denyse at Grain de Musc notes an "outright animalic funk, with a practically Lutensian level of cumin and enough civet to put the neighborhood toms in a state of alert" and Patty at Perfume Posse mentions "a body builder’s hair armpit fresh from the gym". So, your mileage may vary: do try before you buy. Perhaps this means I'm finally ready for Rochas Femme?

As for me, I like but don't adore Al Oudh. Part of that is probably just oudh-fatigue — I like oudh, but it's an aggressive note, and it tends to dominate a composition in such a way that I don't feel the need for a zillion variations on the theme.1 A bottle of a rose-heavy oud like Montale Roses Petals or Czech & Speake Dark Rose, and then another of a less floral oudh, like Yves Saint Laurent M7 or Tom Ford Oud Wood, would probably cover my oudh needs for the rest of my life.

1. I've heard the same accusation leveled at vetiver, and it's probably true: most vetiver fragrances smell mostly like vetiver. But I adore vetiver, and even minute variations are interesting enough to me that I want to own them all. Here's hoping the niche sector doesn't launch 20 vetiver fragrances next year and wear out my interest on that front as well.