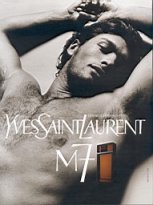 Today Marlen and I are debating the merits of M7, the fragrance launched by Yves Saint Laurent in 2002. It was the line's seventh fragrance for men, and the first under the creative direction of designer Tom Ford. M7 was created by perfumers Jacques Cavallier and Alberto Morillas, and includes notes of agarwood, Haitian vetiver, bergamot, mandarin, rosemary, amber and musk.

He says: I first tested M7 on a warm spring day in Kyoto and immediately thought, “Well this isn’t the best time of year to launch this.” The scent was heavy and rich, masculine and earthy. The most prominent feature was the centerpiece of vetiver — and I’m not a huge fan of vetiver. Having had countless chances to re-visit it, and even more chances to purchase it (I haven’t), I still come to the same conclusion: this is simply too much of a good thing. As a candle, yes. As incense, yes. But as an Eau de Toilette, it’s just too much. If there was some way the fragrance could have been lightened, sweetened, smoked, anything, it could have helped…but I wish it had a little more going on…not that any of the fragrances under Tom Ford’s direction are remarkably complex. I feel that Yves Saint Laurent Rive Gauche and Gucci Envy both suffer from similar faults: dark, heavy and missing something.

She says: I can't argue with Marlen that M7 is best enjoyed on a cool day — the weather here today is expected to hit almost 90 degrees, and yes, M7 will no doubt be too much of a good thing before the day is out. But on the right day, it is one of my very favorite fragrances for men.

As with most fragrances containing agarwood, it starts with a bit of a medicinal edge, but that fades along with the short-lived citrus top notes. After that, it is dark, warm, and dry, with a mild spiciness and deep earthy woods. To my nose, it isn't heavy in the least, but it does make a statement, and the intensity of the vetiver and agarwood are not likely to suit you unless you like both notes.

It is rare that I find a scent too masculine to wear, but M7 probably qualifies on that score. I do wear it, but I rarely wear it out of the house. On a man, it is one of the sexiest fragrances I can think of.

Yves Saint Laurent released a lighter version, M7 Fresh, in 2004. I have never tried it but do comment if you have. The regular M7 can be found most anywhere; parfum1 has a 50 ml bottle of the Eau de Toilette for $25.95.

Note: the image shows one of the two original ads for M7, and is via Images de Parfums. Both ads feature tae kwon do champion Samuel de Cubber; the other version (which you can also find at Images de Parfums) showcases his glory a bit more fully and was rejected by several magazines as too controversial.