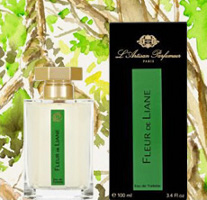 It is obvious that the gods are not pleased with me this year. Two of my most-looked-forward-to fragrance releases, by two of my favorite perfumers — the latest in the Jardin series from Hermès (which turned out to be Jardin après la Mousson) by Jean-Claude Ellena and the latest in the travel series from L'Artisan Parfumeur (which turns out to be Fleur de Liane) by Bertrand Duchaufour — are both melon-y aquatics. Despite a lingering nostalgic fondness for Aramis New West, the most melon-y aquatic of all melon-y aquatics, I just don't like the category. So if you're looking for an unbiased review (assuming such a thing exists), you'll have to look elsewhere.

First, let me just say that I've been thrilled with everything from the L'Artisan travel series so far. Bois Farine, Timbuktu and Dzongkha are all in my collection. The new Fleur de Liane continues with the "voyage of the perfumer" theme; Bertrand Duchaufour reportedly found his inspiration for the fragrance on an island off the coast of Panama during the rainy season.

Fleur de Liane is a green floral, and while the opening is markedly "fresh", admittedly it hasn't got quite the burst of marine that so makes me crazy in Après la Mousson. It starts out (and stays) very soft, and the blend resonates nicely with its rainy tropical forest inspirations: it's vegetal green and humid, and has a casual, relaxed feel in stark contrast to Mousson's fizzy spice-fest (the notes: ozone, marine and green notes, marigold, tuberose, magnolia, guaiac and cedar wood, vetiver, patchouli and mossy notes). The florals in the heart are likewise quiet, and laid over a (mostly-pale at first, deeper and darker as it dries down) woody earthy base that fans of Duchaufour's work will immediately recognize as bearing his signature. Much of the melon dissipates after an hour or so, but enough lingers to keep Liane dewy and wet straight through.

Fleur de Liane is pleasant — it doesn't annoy me as much as Mousson simply because there's less cantaloupe. And it's arguably the most "accessible" of the travel series; certainly it's less overtly exotic than Timbuktu, but it doesn't strike me as veering off into bland, as did Duchaufour's last foray into fresh air and fresh water, Magnolia Romana by Eau d'Italie. But for all that, I can't love it. I know many of you haven't tried it yet, but if you try it later and you love it, do come back and comment.

L'Artisan Fleur de Liane officially launches next month; for buying information, see the listing for L'Artisan under Perfume Houses. It can be found now, in 50 and 100 ml Eau de Toilette, at First in Fragrance in Germany.